Injured Kieran Gething out for 2020

Gething sidelined for remainder of the year

Another Welshman, Craig Woodruff (10-6, 4KOs), the same man Gething defeated to win his Welsh title, stepped in to fill the void. The 28-year-old from Newport did well on the night, knocking down ‘The Diva’ from Naas in the fifth round and narrowly losing out on points, scored at 77-75 to unbeaten Cully.

Forced to watch from the side-lines at his home in South Wales, Gething explained what happened with his arm injury, “My left elbow has been getting progressively worse for a while now. It’s been going for years, on and off for the vast majority of my career, and it has become really bad since last year.

“I had six to eight weeks rest before this latest training camp and I started slowly to be safe, but then during sparring sessions, it’s been giving me problems.”

The 26-year-old decided to address the issue as soon as possible in order to begin the rehabilitation process.

“I received my MRI scan results which showed a bony fleck on the x-ray so there’s floating material in my elbow and a little bit of calcification as well.

“So, it’s an operation to get the material out, with around three months recovery time. All being well, I can start training six weeks after the op. It won’t be flat-out training or punching, I’d have to ease back into it, just strengthening it, but I could be training again by December and ready to fight in February, which is only six months from now.”

Signed to MTK Global, the super-lightweight’s last fight was back in November last year when he reached a stalemate with Londoner Jeff Ofori (10-3-1, 3KOs) in the Golden Contract quarter-finals, which means he hasn’t fought at all in 2020.

Despite this setback, the optimist is staying positive about the recent news. “I always like to look at things positively, so knowing the outcome has given me peace of mind. I’ve accepted that 2020 has been taken off the table, but I’m optimistically looking ahead to getting better and fighting again.” 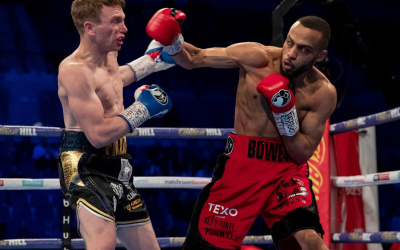