Burton and Bolotniks weigh in for battle

Hosea Burton and Ricards Bolotniks both made weight today ahead of their highly-anticipated #GoldenContract light-heavyweight semi-final tomorrow night.

Burton (25-1, 11 KOs) faces Bolotniks (16-5-1, 7 KOs) in Riga, Latvia in their highly-anticipated fight on Saturday, live on IFL TV, with a place in the final of the Golden Contract light-heavyweight tournament at stake.

Burton reached the semi-final thanks to a dominant unanimous decision win over Bob Ajisafe during the quarter-final in December, while Bolotniks picked up an incredible first round stoppage win against Steven Ward, winning the WBO European light-heavyweight title in the process.

The winner of Bolotniks-Burton will take on the winner of the other semi-final, which sees Liam Conroy meet Serge Michel at Production Park Studios in Wakefield, England on Wednesday. 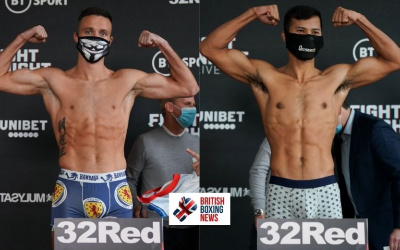