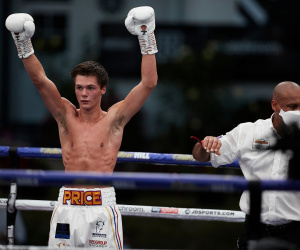 Hopey Price (3-0, 1KO) has vowed to showcase the difference in 'levels' when he collides with Central Area featherweight champion Zahid Hussain (16-1, 2 KOs) at The SSE Arena, Wembley on Saturday February 13, live on Sky Sports in the UK and on DAZN in the U.S. and more than 200 countries and territories.

The 20-year-old southpaw who turned over on the back of a hugely successful amateur career, which culminated in capturing Gold at the Youth Olympics in 2018, has dazzled in his three professional outings, most recently on the second instalment of Fight Camp last summer with a polished victory over the rugged Jonny Phillips.

Once-beaten Hussain presents by far the toughest test of young ‘Drago’s’ career so far, but the Dave Coldwell-trained starlet has promised to steal the show with an eye-catching display.

“All I know is Zahid Hussain is from Leeds and he’s 16-1”, said Price. “Most people would look at someone who’s 3-0 fighting a 16-1 fighter as a big step-up, but for me I take it in my stride. I will prove how good I am and I’m looking to steal the show.

“I want to prove I’m the next big thing to come from Leeds, there’s levels to boxing and I will show in this fight that I’m levels above Zahid Hussain. If I keep putting on these good performances then I’ll continue to be on the good shows.

“I don’t feel I’m far off Title level but I’m still only young. As soon as Dave and Eddie give me the green light then I’ll be ready to bring belts back. I think the fans are going to watch me and think, ‘Wow, who is this kid!’ I want to people to say, ‘This kid is special'.

“I’m not in this game to just become a British Champion, I want to be one of the all time greats. If I am going to get there then I need to take these types of fights and show how good I am. I believe I should be beating guys at this level in style.

“On February 13 you’re going to see a big improvement from me. Fight Camp was an amazing experience and against Johnny Phillips I stepped out of the journeyman bracket and fought someone who was coming to win, which only means you’ll see a better Hopey Price."

Scott Fitzgerald to return in March