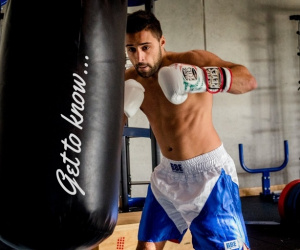 Get to Know… Rohan Date

Get to Know…unbeaten Irishman Rohan Date

Standout amateur from Waterford, Ireland was the subject of BBN's latest interrogation process as we shot a series of quickfire questions at the Irishman.

Nickname? “Still deciding on it, I didn’t have one growing up and just stayed that way at the minute.”

Biggest achievement in boxing? “Winning the World Golden Gloves in 2013 in Washington DC.”

Toughest ever opponent? “A guy from Russia called Maxim in the amateurs.”

Goals in boxing? “I have a checklist of honours – fighting in Madison Square Garden and Vegas are among them, the end goal is to get world title, but there’s lots of other titles I want along the way. I have been out of the ring for three years – in 2013 I just gave up and moved to Dubai – so I’m just getting back in swing of things.”

Retirement age? “Not exactly, but would like to give the next five or six years my everything then see what happens from there. When you don’t love it anymore, that’s when you stop.”

Team? “Johnny Edwards is my head coach; Kazy Kindon and Lenny Fletcher do the corner; I have advisor called Ron; there's Robbie Flynn; my sponsors in Dubai are Real Boxing Gym – they are a massive support to me; my sparring partners over the years have been Jay Byrnes, Anthony Fowler, Paddy Gallagher, Luther Clay, Mikey McKinson, Asinia Byfield, and Derek Renfrew.”

Ring walk song? “The Fugees – Ready or Not.”

Pre-fight rituals? “When I was younger, I had all these kind of rituals but just kind of got rid of them as a pro. Things like my laces, they had to be tied twice around the boots and stuff like that.”

Best venue? “In the Europeans Under 23’s there was a place in Kaliningrad, Russia, which held 5,000 people and the atmosphere was amazing.”

Favourite belt? “Everybody loves the WBC, but I like the red belt – the IBF. The McDonnell brothers trained over at my gym in Dubai and I got to see it up close.”

Favourite football team? “I was born in Manchester so it’s Man Utd. but I quite like Reading FC as well because two or three lads I know from Waterford are on the team and I think the manager is from there as well.”

Other sports? “Football is the only one really, but I also watch Irish sports and tournaments.”

Favourite sportsman? “I really admire Lebron James for everything he has done opening up schools and offering scholarships to kids out in America.”

Hobbies: “There’s no spare time! Training is the only hobby I have! To me, it is a hobby because it’s what I enjoy doing so it’s not work for me.”

Favourite music? “Either house or R’n’B.”

Motto? “Give it everything you’ve got.”

Next fight? “December 15 at Thistle Hotel in Heathrow. Looking at an eight-rounder for the first time so that I'm eligible to fight for an Irish title next year.”

What fight do you want to see happen this year? “GGG vs Callum Smith.”

What is the best division in boxing to watch? “I think welterweight, they’re a different type of monsters.”

If you could fight anyone, past or present, who would it be? “I think Pacquiao, he’s one of the greats and just think it will be a good fight.”

What would you most like to be remembered for? “Leaving a legacy in the Irish boxing scene, there’s not many from Republic of Ireland that have done big things in boxing, and I want to be known for my dedication to the sport.”

If you weren’t a professional boxer, what would you be? “Just working in some sort of job I wouldn’t have been happy doing.”