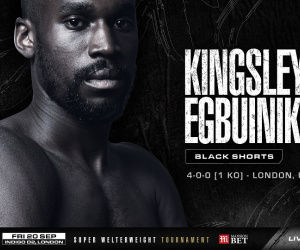 Get to know… Kingsley Egbunike

Get to know… Kingsley Egbunike aka ‘Obi’

‘Anything that I put my mind to will suit me, including this style of fight. It’s a brilliant platform, live on BT Sport, and it’s a great purse if you win too.’

York Hall regular Kingsley Egbunike (4-0) embarks on the biggest challenge of his brief 10-month pro career, as he steps though the ropes on Sptember 20 in the country's capital to enter the Ultimate Boxxer 5 tournament, featuring the super-welterweights.

BBN caught up with 'Obi' ahea of the competition that sees the winner grabbing a majority share of a £50k prize fund.

Harry Woods reflects on his Ultimate Boxxer experience: “I’d do it again in a heartbeat”

Kingsley Egbunike’s professional record stands at an impressive 4-0, but Obi is also yet to drop a round in those four outings. His Dad got him into boxing as a youngster after Egbunike found himself in trouble at school. A stellar amateur career followed, which saw him win two Haringey Boxing Cups - he has also sparred with James DeGale and Chris Kongo, and is keen to keep progressing up the ranks.

How long have you been boxing?

I started boxing when I was 14-years-old, so that would be 12 years ago.

What got you into the sport?

I’ve always been into sport, played football, did Judo and some running when I was younger, but my Dad suggested giving boxing a go. He competed to a high level at Judo, and used to train at Fitzroy Lodge and he had a passion for boxing that he passed on to me. And I got into a tiny bit of trouble at school, so that’s why Dad suggested it.

Anything that I put my mind to will suit me, including this style of fight It is a great opportunity for me to get some exposure, climb the rankings and really show people my ability and what I can do. It’s a brilliant platform, live on BT Sport, and it’s a great purse if you win too.

Why should we make you the favourite for the UB5 Golden Robe?

I have a lot of experience, I’ve been boxing since I was 14-years-old, I have a good amateur pedigree, I’ve won two Haringey Boxing Cups and I’ve also sparred with a world champion in James DeGale, with the likes of Chris Kongo, and I really dedicate myself to the cause.

When you’re training, what’s on the music playlist?

I mix it up, love a bit of reggae - last fight I came out to Sister Nancy ‘Bam Bam’, but I listen to a lot of Rap, some commercial RnB.

Who is your favourite sports team, or individual athlete outside of boxing?

Outside of boxing, I would say I enjoy watching athletics, 100m and 200m races - I liked to watch Usain Bolt, he’s a great character, a funny guy.

Who is your favourite fighter?

That’s a hard one, but right now I would have to say Terrence Crawford and Andre Ward. But of all time, it has to be Muhammad Ali - not only for his boxing, but everything outside of the ring too. A true role model.

What would be your dream fight, if we could transform your weight, height, or put you in a time machine?

I wouldn’t say against one specific fighter, but I’d see myself defending my title, defending the belt on the biggest stage in Las Vegas or New York, with my name up in lights.