Get to Know… Connor Butler

Born: I was born in the Royal London hospital in Whitechapel, so I was born within the sound of the Bow Bells which means I'm actually a cockney! I lived in London until I was 10.

Favourite all-time boxer? “Arturo Gatti. Just loved his style and how much of a warrior he was.”

Favourite current boxer? “It’s got to be Canelo Alvarez.”

Favourite fight? “So many! Hagler-Hearns; Naseem-Kelly; Gatti-Ward. My favourite fight of recent was Dillian Whyte vs Derek Chisora - the rematch.”

Boxing clubs? “I boxed for Kirby ABC as an amateur, and Everton Red Triangle as amateur and pro.”

Biggest achievement in boxing? “I won a Junior bronze medal at the European Championships when I was 16.”

Toughest ever opponent? “All the lads in the Everton Red Triangle gym are a challenge every day. I remember I boxed a kid, Rufat Hasanov, from Azerbaijan when I was 14 and he had won the Youth Olympics.”

Goals in boxing? “I want to be a world champion, but I also want to be successful and provide a life for me and my family. I want to have something to show for it all when I’m done.”

Retirement age? “I couldn’t really say an age because you never know what could happen. I know I don’t want to go on past my best, so I’ll stop when I’ve achieved everything I’ve achieved. I wouldn’t want to walk away from the sport forever though, I would still like to have my hand in it. Hopefully, it’ll be when I’m 30+ at least.”

Boxing style? “Entertaining, I like to get stuck in; you’ll always get an entertaining fight with me. I’m just a bit of everything really, I like to be on the front foot and go looking for it.”

Ring walk song? “I always have James Brown – The Boss, but I might change it soon. I got it from my favourite film, ‘Lock, Stock, and Two Smoking Barrels’.

Pre-fight rituals? “Not really, no. I used to pace up and down to get my head on the job but that was when I was younger, ever since I’ve got older I just like to relax. When I switch on now is when it’s warm up time.”

Best venue? “In St Petersburg, Russia, for the World Championships; that was unreal.”

Best belt? “The WBC. I like the British title as well, it’s got its own history to it.”

Other sports? “I like Snooker, I like watching Mark Williams because he’s funny, but all-time favourite is Ronnie O’Sullivan.”

Favourite holiday destination? “I sort of go away on holiday to different places. I like Tenerife.”

Favourite TV programme? “Top Boy was good, I enjoyed that.”

What actor would play you in a film of your life? “Leo Di Caprio or Charlie Hunnam.”

Favourite music? “I like all the old classics, to be fair. I listen to anything apart from heavy metal.”

Favourite superhero? “It’s gotta’ be Superman ain’t it, he can shoot lasers out of his eyes!”

Phobias? “Do you know what, I don’t really like the sea. I’m not the best swimmer in the world and you don’t really know what’s in there, it freaks me out a bit! I’ll go in up to my knees but would rather stay on the beach.”

Motto? “Switch on; I’m always thinking in my head to wake up and focus. I say it in my head all the time – ‘Switch on’.

Next fight? “February 28 in the Grand Central Hall in Liverpool.”

What fight do you want to see happen next year? “Tevin Farmer vs Gervonta Davies because of all the back and forth they’re having. I’d like to see Tyson Fury vs Anthony Joshua because I think Fury will school him but don’t think it would happen because they’re going different ways.”

If you could fight anyone, past or present, who would it be? “Roberto Duran or Arturo Gatti, I’d have a war with them.”

What is the best division to watch in boxing and why? “At the minute, it’s got to be the heavyweights because there’s so many fights to be made and upsets happening everywhere. I like watching Martin Bakole at the minute, I think he’s a great fighter.”

What is most important to you in your career between money and glory? “Both are important to me, I’d love to be one of the best fighters about, but it’s a business at the end of the day and you have to earn. I want to be a world champion because I’ve dedicated my life to it, but don’t want to have nothing to show for it at the end so I want to be able to retire with enough money.”

Where do you want to be in your career in exactly one year’s time from now? “I want to be hopefully 9-0-1. I’m scheduled to fight five times next year so with all wins then hopefully be knocking on the door for titles this time next year.”

Tell us something that not many people know about you? “People know me as a boxer, but they often don’t know that I won a lot of Thai-boxing medals as a kid.” 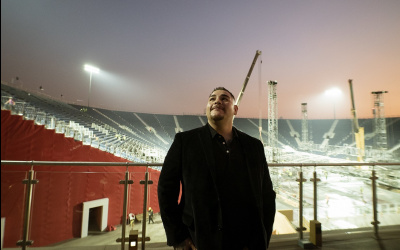