Former prisoner Louis ‘Razor’ Robinson on the road to redemption

Banged up for three years of his life, heavyweight debuant Louis Robinson bares all

On the brink of beginning his pro boxing career, Louis ‘Razor’ Robinson was sentenced to six years inside

He spoke to BBN exclusively about his '50 second mistake', life behind bars, and his ambition to become British heavyweight champion now his life is back on track again.

31-year-old heavyweight Louis ‘Razor’ Robinson is a man on a mission ever since his early release from prison in September this year.

His relationship with boxing goes back to when he was a small child, but it’s been an on-off affair until now.

“I started boxing when I was just a kid with my dad in Droitwich,” he began. “My dad had a few amateur bouts and used to go down there most nights just to keep fit.

“I’d go along with him and train for a few months then stop, just fooling around with it. It wasn’t until I was 18 or 19 that I stuck to it and started to get a few fights under my belt. I had 13 unlicensed bouts and won them all.”

In his late twenties, he began to take his boxing more seriously than ever before and came agonisingly close to making his professional debut when signed to Amir Khan’s former manager, Asif Vali.

“I stopped training around 2013, then started again in 2016, which is when I first spoke to Asif Vali. I moved to Bolton, signed professional contracts, and was meant to make my pro debut on a Kieran Farrell Promotions show in April 2017, but unfortunately the show got cancelled, so then I was due to fight in September that year, which is when the worst happened and I got sent down in the August.”

Robinson wished not to go into too much detail, stating that it was in the past and he had no intention of dragging up previous memories that will only serve to upset him and the other parties involved.

He briefly described the grievous events that led to his incarceration, “I was walking home through my local town centre with my younger nephew, only 17 at the time, when a group of lads started at us. I had an altercation with one, he’s threatened to stab me and put his hands in his pockets, so I gave him a couple of digs and dropped him, then I picked back him up and gave him another dig. I couldn’t tell you why they started at us, but that last action of mine took away my self-defence plea.”

Following his arrest, Robinson carried on with his life and worked hard in the gym to realise his ambitions of becoming a professional boxer.

He continued, “I was on bail for a year. I moved to Bolton to train at Alex Matvienko’s Elite Gym, because my barrister told me the court case won’t affect my boxing because I won’t go to prison as it was self-defence.

“Then in April 2017, there was a plea hearing, where I pleaded not guilty, citing self-defence, then a few months later in August I turned up court and was told, there and then, that I could be facing up to 12 years in prison because they won’t accept self-defence and placed the crime as ‘Category A’ GBH!

“I really regret not being able to tell my side of the story to win the court over. I had glowing character references from Asif Vali and other people like that, but the judge’s words were that ‘Mr. Robinson is a professional boxer and knew what he was doing’.

“I pleaded guilty so I wouldn’t get 12 years and got given six instead. The prosecutor on the other side even said to me that I had just cause to do what I done. Even the officer in charge came up to me and said, ‘No matter what happens today, you don’t deserve this’.

“I think I had the wrong judge on the wrong day. I could have gone to the court the next day and got a suspended sentence. They just used me as a boxer as an excuse. I had a completely clean record before this.”

As is customary in this scenario, Robinson was taken straight from court to prison to start his six-year sentence.

“From court I went straight to HM Prison Hewell in Redditch,” he confirmed. “I was there for one week, then got moved to a lower Category C Featherstone prison near Wolverhampton.

“I was only in there for two days on the induction wing and a big riot kicked off! The prisoners set a fire, smashed up the wing, smashed the windows… it was unreal! This was my second week of jail and I thought ‘What the hell?! I’ve got three years of this?!’

“The riot went on until 11pm. We were told to lock ourselves in our cells and shut the door, but I wasn’t comfortable doing that while there was a fire blazing. Then the riot police came in and slammed us all on our faces and left us in the cells until 7pm the next night. Because I didn’t allow them them to shut me up in my cell, I got in trouble for it, so then they grabbed me and took me on three hour drive in the van up to Hull.

“I was in HM Hull for a week, then moved to Humber, where I finally got settled there for 16 months, then moved to an open jail – HMP Sudbury – and was there for the rest of my 19 months sentence. That was the end of it then, I started getting day releases, then weekends out.”

Described as a 'Gentle Giant' who "made a 50 seconnd mistake", his good behaviour and willingness to work and help other prisoners saw him released from his prison term early.

“It was on August 14 that I got released, so I ended up serving three years of the six-year sentence,” he looked back, relieved.

Whilst inside, ‘Razor’ was able to keep himself sharp by training regularly and also taking others on the pads in the prison gym.

“At Humber I got myself a job as a worker helping other people on the wing. I was training people on the pads to keep my mind occupied.

“Then, in Sudbury, I became friends with another boxer; he was a good amateur and won the ABAs, and we teamed up and trained together.

“Up until I met him there was no one to hold pads for me, not properly anyway. Jail’s a place where people say they can do stuff, but they actually can’t. They flinch on the pads and you end up overreaching. But he was motivation for me and someone I could look up to, we took each other on the pads every day and he taught me to sit on my shots and sink my knuckles in.

“From my last year to my release, I really stepped up in everything, so it was perfect timing for me. My boxing ability feels better than when I first went in. I feel even hungrier now and I never want to go back there again.”

Since his release, Robinson has got straight back to his boxing, picking up where he left off by spending almost every single day in the gym training himself, as well as others.

“For the first week, it was a bit overwhelming with all the messages of support from everyone wanting to meet up, I was a bit like a rabbit caught in headlights at first.

“I got straight back in the gym for myself and been training people as well. Someone asked me to take them on the pads and I ended up with 8-10 clients a day and almost feels like I’ve never been away!”

During his three-year absence, Tyson Fury came out of retirement to win the WBC World heavyweight title, Anthony Joshua lost then regained his heavyweight titles, while young prospect Daniel Dubois moved up from a 4-0 Southern Area novice to a 15-0 British champion.

There are also fresh new faces in the British boxing scene at heavyweight, such as Fabio Wardley, the current English heavyweight champion who was only 2-0 at the time of Robinson’s sentencing.

Despite all this taking place outside of the four walls that Robinson was stuck within, he still kept up to date with all the goings on.

“I could still watch some boxing but we only had limited TV channels, so I could watch the Channel 5 and ITV shows, but I had a radio so I could listen to a lot of other fights, like Tyson Fury over in America. It was hard for me because I watched some of those Channel 5 boxing shows and could see some of the heavyweights that were fighting on there and thought, ‘Wow, this is embarrassing!’

“I was itching to fight when I came out and it’s just typical that I’m ready to go during the middle of a pandemic!

“On the positive side, boxing is booming at the minute and people are watching it on any kind of platform – there’s iFL TV; the Channel 5 shows; then Sky and BT. It seems to have attracted a wider audience since I’ve been away which is definitely good for a pro, so it’s a good time right now and women’s boxing has gone through the roof too; Katie Taylor has been great for it.”

Now that ‘Razor’ is back in business, he explained what he’s doing right now to prepare for his professional debut fight, whenever it may be.

“When I first came out, I was just ticking over, doing my 10k runs most days, plus shadows, circuits, bag work, then every couple of days my old trainer will do some pads with me.

“I wanted to take my time to find the right trainer for me, which I’ve done now that I’ve teamed up with Asgar Tair at Prospects ABC.”

The heavyweight division is teeming with talent and thrills once again, ever since Tyson Fury dethroned Wladimir Klitschko in 2015.

There’s top talent, colourful characters, tantalising prospective forthcoming fights, and impressive prospects coming through the ranks to continue that drama and excitement for the foreseeable.

It has a mixture of everything, but ‘Razor’ feels that he can bring added value to the blue-ribbon division himself, “I’d like to think I can bring style to it, there’s not many fast, in and out, light on their feet, heavyweights like me.

“I move like a 5’ 6” welterweight, anyone who watches me train thinks I’m a freak of nature because of the way I move so fast. I’m not comparing myself to Oleksandr Usyk, but his style is similar to mine – in and out, light on our feet, picking opponents apart.”

Following the long lapse in his life, Louis is eager for his boxing career to lift off again.

“Obviously, I’m not getting any younger so it’s almost now or never for me. I’m only 31 and heavyweights have a longevity, but I’m keen to get going now.

“I’d be happy to get my hands on the British or Commonwealth title, and anything else would be a bonus. I still don’t think, at domestic level, there’s many better than me out there.

“I haven’t even had my pro debut yet, but I truly believe in my ability and just got to get out there and prove it!” 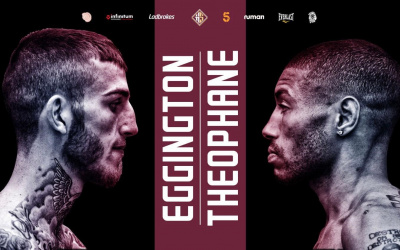