Sparring partner reveals that Tyson Fury is 'something special'

Former heavyweight champion Tyson Fury (26-0) is set to take on Francesco Pianeta (35-4-1) in Fury's second fight since returning from a two-year absence later in August. Pianeta isn't exactly a household name, but Fury is quite familiar with the German-based fighter.

Fury and Pianeta sparred back in 2012, and Fury said back then that he was impressed by what Pianeta could do. Fury said, "I sparred with him in Germany when he was 26-0. He was tough, strong and he is a good opponent, very good. It was before he went on to fight Klitschko and Chagaev for world titles, but I was impressed. People say this is a big step up from Seferi and they can say what they want, but Seferi went the full distance with a current world heavyweight champion, Manuel Charr."

Finding betting sites that give Pianeta much of a chance to beat Fury is a tall order. Most list Fury as a massive favorite around 1/100 to win.

Fury was criticised after his return fight in which Seferi, a cruiserweight, bowed out after just four rounds in Manchester last June. Seferi was no match for Fury's advantageous combination of height, reach and weight. Rather than focusing on the fight itself, Fury spent most of the bout showboating in the ring at Seferi's expense.

Fury's coach, Ben Davison, has since told him to do away with the antics and focus on fighting. Based on the words of unbeaten Dane Kem Ljungquist (4-0), Fury looks like he has taken his coach's advice.

Ljungquist, 28, has been sparring with Fury ahead of the latter's upcoming fight on August 18. Of Fury, Ljungquist said, "It was a great experience to share the ring with Tyson Fury. He really impressed me. He is very good. He's light on his legs with good movement and really hard to hit. A very awkward fighter. There is no doubt he is something special."

Fury, also known as "The Gypsy King," will put his 26-0 record on the line against Pianeta at Windsor Park in Belfast. Pianeta, who was born in Italy, won the WBC world youth title before winning EBU and WBO European titles. He has fought twice in world championship bouts, but both ended in defeat. Wladimir Klitschko got the better of Pianeta in 2013 and Ruslan Chagaev did the same in 2015.

Ljungquist added, "He is even sparring without a head guard because he's almost never hit, but I think I gave a good account of myself, and I made it back to Denmark in one piece! I think we have a similar style. We are both quite defensive but explosive at the same time. However, there is a lot I can learn from him when it comes to his speed and mobility."

Fury became the first man to defeat Klitschko in a decade with his win over the decorated Russian fighter in 2015. He claimed the WBO, IBO, IBF and WBA World Heavyweight titles all in that same year. After duking it out with Pianeta later this month, Fury is reportedly eyeing future fights against the likes of Anthony Joshua and WBC World Champion Deontay Wilder.

Ljunquist, who debuted in 2017, is a former three-time domestic and two-time Nordic amateur title-holder. He has slowly been moving up into the professional ranks over the last few years with the hopes of putting his name into the ring for future heavyweight titles. His next fight will come against Slovakia native David Vyletel after his original opponent, Gennadi Mentsikainen, was forced to withdraw due to an eye injury.

Below: The Gypsy King and the Great Dane 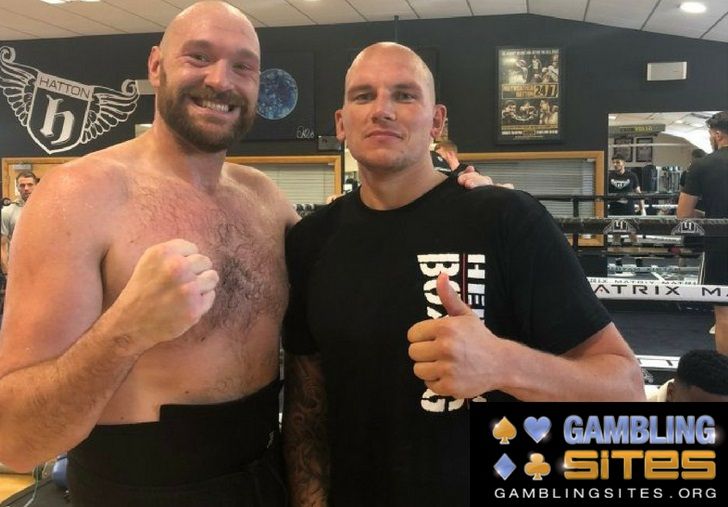 Carl Frampton wants either Oscar Valdez or Josh Warrington next