The 21st March HOUSE OF PAIN show was already a huge stacked card with title fights galore but promoter Steve Goodwin still wasn't satisfied and worked to improve the card for the paying boxing public.

After weeks of negotiations, Goodwin Boxing have announced that English Middleweight Champion Linus Udofia gets the first defence of his title against the experienced John Brennan.

Udofia who captured the vacant title back in November 2019 against West Midlands Tyler Denny, now has his sights firmly set on the 21st March date. Udofia now unbeaten in 15 fights looks to lay down a marker for the rest of 2020.

19 fight Brennan boasts a record of 12 wins, 5 losses & 2 draws one of those draws coming against Udofia's stablemate Sean Robinson back in June 2019. From that fight, Goodwin Boxing fans will remember the non-stop all action that Brennan brings. This is an opportunity he will not want to let slip.

The card already hosts Liam Dillon vs Dennis Wahome in an English Super-Featherweight title fight, Adrian Martin & Sean Robinson battle it out for an English Super Welterweight Title Eliminator plus Darrel Church & Dominic Felix come head to head again but this time over 10 rounds in a Southern Area Light Heavyweight Title Eliminator plus a full undercard details of which can be found HERE 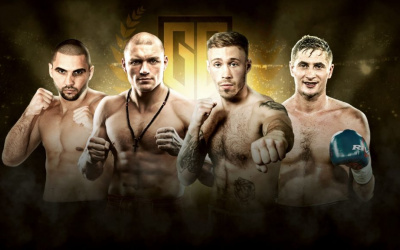