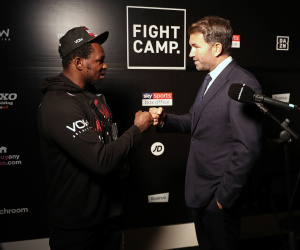 In what was meant to be a victory to secure an extended shot at the WBC world title, Dillian Whyte's (27-2, 18KOs) dream vanished when he was brutally KO'd just 30 seconds into round five of his WBC Interim and Diamond heavyweight titles fight by 40-year-old Alexander Povetkin (36-2-1, 25KOs).

Brixton boxer Whyte was knocked out cold by the vicious 'Russian Vityaz' in the finale of Matchroom Fight Camp in Brentwood, Essex, on August 22.

32-year-old Whyte had completely controlled the fight, flooring his opponent twice in the fourth round, but was smashed by a perfectly executed left uppercut in the fifth that ended his hopes in a flash.

Matchroom's Eddie Hearn reacted to the shocking result, “I felt like I was in some dream. The fight was over, virtually. Povetkin started well, Dillian Whyte was measuring up and had a great finish to the third round. Then he has two heavy knockdowns in the fourth round. I know I felt, and a lot of people felt, that it was over. But this is the drama of the sport that we love. This is the drama of heavyweight boxing – one punch can change everything. And tonight, one punch just completely changed the fight. Dillian Whyte was in total control of the fight, I really felt confident that he was about to end the fight. Was he complacent? Was it just great work from Alexander Povetkin? There’s that uppercut that some believe Whyte is susceptible to and Povetkin slipped right under and delivered it. Unbelievable. It is a shock. We knew how good Povetkin was and we knew how dangerous he was. Dillan Whyte had that fight virtually in the bag but we know how dangerous these elite heavyweights can be. It was just a thrilling knockout on a thrilling night. I’m pretty much lost for words.”

The Jamaican-born Londoner would have had a mandatory challenge of Tyson Fury's WBC Heavyweight Championship finally enforced after a 1000-day wait with a win in Essex, but instead became the victim of a stunning come-from-behind victory.

Dillian Whyte immediately asked Eddie Hearn for the rematch after the fight, “Can we get the rematch in December? I'm good, I'm good. It's just one of those things where it just landed didn't it. I was bossing it. It is what it is. Rematch. It's cool, it's all good. That's what boxing is about.”

Promoter Hearn confirmed, “We have a rematch clause. That was the first thing that Dillian said when he came out, ‘Get me that rematch, get me that rematch.’ It was a heavy knockdown, he’s going to have to take his rest. Povetkin is the mandatory now but he won’t be called. The only person to get called to negotiate with the winner of Fury vs. Wilder was Dillian Whyte. So we will exercise that rematch clause and we will look to make that happen before the end of the year.

“Listen, it’s a huge fight. It’s a dangerous fight now because obviously back-to-back defeats has a different shade on it. I know he will come back from this. It is crippling for Dillian to lose that number one position but he will be back. I believe he will win the rematch and bring his number one position back to life. This is the best sport in the world. The most dramatic sport in the world. This is what the sport brings us and sometimes it’s brutal.”

Povetkin is also open to the return fight, “First of all, my future plans don’t depend on me, it’s more a question for my promoter and for Eddie Hearn. So we will see what they decide. At the same time, I want to thank Andrei Ryabinski and Eddie Hearn for everything they do for me.”

The visiting Russian, Alexander Povetkin, said that he didn't feel troubled by the knockdowns and was still on course to win the fight in his own way, “I didn’t feel that I would finish the fight like this. I was pretty confident in the fourth round that, even though I went down twice, it was OK. It wasn’t too much damage.”

He then discussed the stunning combination that ended the contest, “I was watching his fights and taking into account that he was missing uppercuts from the left and from the right. During my training, I was training on putting combinations around those shots.”

When asked whether this was the best punch of his career, he stated simply, “Yes, definitely.”

Povetkin’s win now makes Anthony Joshua vs. Tyson Fury easier to arrange, Hearn confirmed, “One of the stumbling blocks was that early in 2021 the mandatory defense against Dillian Whyte. Alexander Povetkin won’t be called as that immediate mandatory even though he sits at number one position. So, yes, that frees up Tyson Fury to fight Anthony Joshua after the Deontay Wilder fight.

“For me, I wanted Dillian Whyte to get that opportunity. I thought a good win tonight would secure that and I thought he deserved that but he did lose and now he needs to rematch and try to beat Alexander Povetkin.”

Shawndell Winters warns Alen Babic: "They made a mistake bringing me over here"

Ryan Walker is determined to prove himself against Lee McGregor: "Now is the time to show what I'm made of"