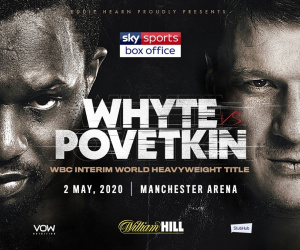 Whyte vs Povetkin could be first fight staged after lockdown

Dillian Whyte "will fight behind closed doors" against Alexander Povetkin, according to promoter Eddie Hearn.

Katie Taylor's undisputed lightweight title fight against Amanda Serrano, originally scheduled to be on the same bill, could remain alongside Whyte vs Povetkin, without a live audience.

"A lot of people think it is difficult for bigger fights to happen behind closed doors," Whyte's promoter Eddie Hearn told The Boxing Show on Sky Sports.

"Whyte vs Povetkin is one of the fights we are planning to stage in the early part of the return, it will take place behind closed doors.

"I don't know how we're going to do it yet. But we have to come back with a bang. Whyte vs Povetkin, along with Katie Taylor vs Amanda Serrano, is a fight that I believe we will see at the end of July or early-August."

Whyte is set to risk his status as WBC interim heavyweight champion and mandatory challenger to the belt held by Tyson Fury by taking on Povetkin, who has beaten David Price and Hughie Fury in the UK already.

Undefeated Irish phenomenon Taylor will take on the seven-weight world champion Serrano with every lightweight belt at stake.

"It's the biggest fight in women's boxing," Hearn said. "Looking at the achievements of Taylor and the growth of women's boxing? It's incredible.

"She is pound-for-pound one of the biggest superstars in the sport.

"I will try to make it happen on the Whyte vs Povetkin card somehow, somewhere, some way."

The British Boxing Board of Control are "hopeful" the sport can resume in July but without fans in attendance, with a maximum of five fights per event and with a pre-tournament medical form, COVID-19 testing and pre-tournament quarantine.

Anthony Joshua is still due to defend his IBF, WBA and WBO belts against Kubrat Pulev despite new offers from foreign territories to host an undisputed title fight against Tyson Fury.

Whyte, who is training in lockdown in Portugal, harbours his own hopes of enforcing a mandatory shot at Fury's WBC title.

Whyte asked: "Why wouldn't he want to fight me instead of waiting for an injured Wilder to recover?"

He has been the WBC No 1 contender since November 2017 but, last week, the governing body claimed he has only been the mandatory challenger since beating Oscar Rivas last summer.

"It's embarrassing for the WBC to say that," said Whyte. "Why hasn't the WBC champion fought me yet and to say I've only been mandatory for over 280 days since I beat Oscar Rivas, but by the time my shot comes around in February 2021 I will have been the No.1 ranked contender for over 1200 days.

"That will be the longest wait in the history of boxing. It's frustrating and disgraceful!"

Every Whyte vs Povetkin article can be found HERE