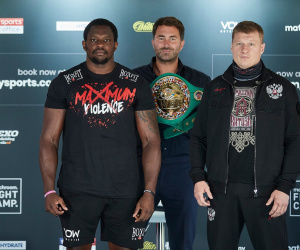 The long awaited Heavyweight showdown between Dillian Whyte and Alexander Povetkin will be broadcast live on BBC Radio 5 Live this Saturday from 9pm.

The biggest fight since restrictions have been eased, Saturday night will see Alexander Povetkin take on Brixton’s Dillian Whyte for the WBC Interim Heavyweight Title and vacant WBC Diamond Title.

The huge clash, which has been rescheduled twice, will take place at Eddie Hearn’s Matchroom Boxing Fight Camp.

Prior to Whyte vs Povetkin, BBC Radio 5 Live will provide live coverage of an exciting undercard, including the rematch between Katie Taylor and Delfine Persoon. Taylor will be hoping to silence her critics following her controversial points win over Persoon in June 2019.

Broadcasting live from Fight Camp, commentary will come from Mike Costello and Steve Bunce, with more names to be announced.

5 Live Boxing Commentator and BBC Sport Boxing Correspondent, Mike Costello said: “On the most significant night since the resumption of boxing, Dillian Whyte plays jeopardy with his career and Katie Taylor has a chance to remove what some consider to be a blemish on her record.

“If Whyte loses here, his hard-earned place in the Heavyweight mix disappears and that prospect might just motivate him to produce a career-best performance. Taylor and Persoon featured last year in the best women’s fight I’ve seen from ringside and Taylor wants to prove her superiority in a way that leaves no room for doubt this time.”