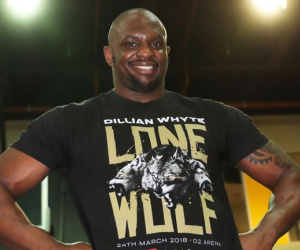 Dillian Whyte still training for Alexander Povetkin fight on May 2

Britain's Dillian Whyte has driven for 40 hours to a training camp in Portugal to prepare for his heavyweight bout with Russian Alexander Povetkin.

The fight, due to take place on May 2 in Manchester, is in doubt and could be postponed this week because of coronavirus.

"It's quiet but there's food on the shelves and I have a good set-up here," Whyte said, on an Instagram live video.

"The mindset is my date is still going ahead, so I'm training."

The British Boxing Board of Control (BBBofC) announced on Monday that the suspension of all events under its jurisdiction remains in place until the end of April, and Whyte's promoter Eddie Hearn said a decision on the fight will be made this week.

The original BBBofC suspension had been until the start of April, although a number of fights in April had already been cancelled. Today, it was announced that there would be an extension to ban all events in April too.

"I had to drive 40 hours non-stop from my house straight to here. I drove because I brought the dogs with me, so I didn't want to fly," said Whyte.

"It's very important to show people in this time that it's important to train, to get on with life the best you can in these kinds of situations, because it is easy to panic and just shut down. I'm just trying to show as much positivity as I can."