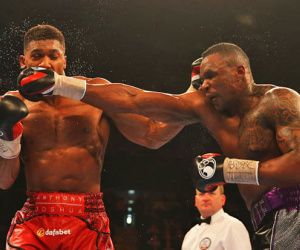 Dillian Whyte (25-1) revealed that he has now received an offer to fight Anthony Joshua on April 13 at Wembley Stadium, but he's branded the proposal as, “utterly ridiculous”, and claims it’s less than what he made to fight Dereck Chisora in their recent rematch last December.

'The Bodysnatcher' spoke exclusively to TalkSport on Anthony Joshua's opening offer: "It is utterly ridiculous. It’s way less than I made against Chisora... I don’t think he wants to fight me. There’s easier paydays out there for him and he knows I will bring problems to his mum’s house."

The heavyweight contender from Brixton has emerged as the front runner to be AJ's next opponent despite fans calling for the unification fight with WBC champion Deontay Wilder.

Whyte knocked out Derek Chisora in December last year to position himself for a rematch against his long-standing rival after the champion's failure to advance talks with American Wilder.

'The Bronze Bomber' looks set to rematch with Tyson Fury for his green belt after their previous encounter ended with a draw, meaning Whyte is an obvious option to fill the void for the April 13 date.

But the Jamaican-born boxer insists AJ must get serious if they are to make the fight, reiterating the opening offer cannot be taken seriously, he said, "He needs to take that into consideration. I bring more to the table than even Joseph Parker did, and he was a world champion.

“It is a ridiculous offer, they’re not serious about the fight. It’s ridiculous, the offer comes with other options as well. It’s silly; I’m a pay per view fighter, I’ve built myself up. It’s not like I’m a journeyman, I worked my way up to No 1 with two governing bodies.

“It is a childish offer, if you want to fight, you make a proper offer, you know what I bring to the table. Me, Tyson Fury and Wilder, you can’t sell out Wembley with anybody else. It looks like Tyson Fury will fight Deontay Wilder (again), so he needs to stop messing about.

“It’s an easy fight to make. I have the rankings, we have history, everybody knows it will be a good fight. Nobody will complain about the fight."

Deontay Wilder vs Tyson Fury 2 in the works