Brixton's Dillian Whyte (24-1) flattened Auckland's Joseph Parker (24-2) twice then survived a near-knockout in the final 30-seconds to claim a points win in their high-stakes heavyweight showdown on July 28 in London.

Both heavyweights had one shared defeat to Anthony Joshua on their respectable records, but it was Parker whose loss tally doubled at the hands of the busier Whyte on the night.

Short left hooks with plenty of power had the Kiwi crashing to the canvas in the second and ninth rounds, but there was a last-minute scare as the South Londoner was downed himself in the final seconds but was saved by the final bell.

The Body Snatcher was more aggressive in his home city and the deserved victory makes him a frontrunner for a world title shot against WBC titleholder Deontay Wilder or a rematch with Joshua on April 13 at Wembley - a fight that many fans are now calling for. Anthony Joshua first has to defend his IBF, WBO and WBA 'Super' belts to challenger Alexander Povetkin at Wembley on September 22.

Parker, prior to this fight, had previously been proud of never having touched down on the canvas as an amateur or a pro but the former WBO champion crumpled to the floor dramatically in the second segment and Whyte loomed over him - it was a mixture of another short left hook and partially a collision of heads that downed the New Zealander for the first time ever.

Parker's work-rate was disappointing and caused many onlookers to wonder just what his tactics were. He did not improve as the rounds ticked on, despite his animated corner-men's encouragement, and Whyte's superior work rate and desire clocked up most of the rounds on the scorecards.

Parker was floored for the second time in the ninth-round, the victim of a brutal left hook from Whyte that might easily have ended the fight in a flash. It was similar to the shot that Whyte used to knock Lucas Browne out cold earlier this year.

Parker landed his own notable shot in the 11th and the pendulum briefly swung asWhyte was hurt and tired in the closing moments. He then hammered Whyte with a right hand in the final round, decking the Jamaican-born boxer but he got up and somehow managed to hear the final bell in the most dramatic of endings.

The visiting fighter seemed to come alive for the final two-rounds only, but it was too little too late as the dogged South Londoner hung in to claim victory, with the judges scoring the fight unanimously to Whyte.

Many critics were forced to admit that the PPV costs were justified in what was an eventful evening of well-matched, exciting encounters. Although, outspoken Tony Bellew slammed Whyte from ringside, “Dillian Whyte owned Parker for ten rounds and then gassed. But ultimately he showed what heart, determination and commitment can get you in boxing. Dillian Whyte technically isn’t very good. He’s got balance issues, he’s all over the place at times but he’s got a heart of steel.”

The self-proclaimed 'King of South London' ruled in his home city and lit up the Greenwich Peninsula with his performance in what was his third time headlining the O2.

Chisora rolls back the years with eighth-round stoppage

Out of nowhere in round eight, a right hand from hell landed flush on the top of Takam's head and sent him crashing to the canvas. He bravely rose to his feet, only to eat another monster right that ended the show and sent the crowd berzerk.

Del-Boy finished the Cameroonian two-rounds quicker than heavyweight kingpin Anthony Joshua managed to do in their October 2017 meeting.

Post-fight, he dismissed the possibility of a Parker fight and alluded to a rematch with Dillian Whyte or a world title shot at Deontay Wilder. 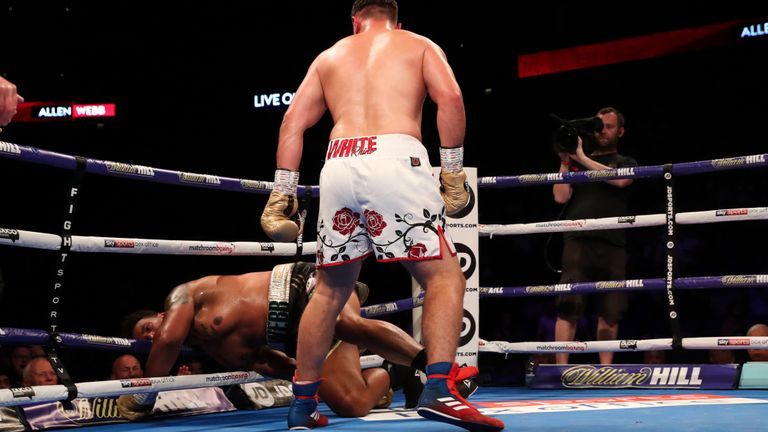 In the first of the heavyweight battles, underdog Dave Allen (14-4-2), pulled off a shocker with a fourth-round knockout of previously undefeated prospect Nick Webb (12-1).

Webb, 30 from Chertsey, was in control of the fight, using his jab to dictate the pace, chipping away at Allen in each round, looking to break him down over time.

Webb, a former ABA champion, soon began to land heavier punches, but Allen was also able to score his own against the taller man.

Allen was pushing forward, as he always does, but was absorbing a lot of punishment along the way. In the fourth segment, however, there was a sudden turn of events as the Conisbrough puncher landed a big right hand that sent Webb stumbling backwards. Moments later, Allen threw a left hook to the body when in close followed up by a thunderous overhand right that landed cleanly on Webb and sent him reeling through the ropes. Unable to get to his feet with just seconds remaining in the round, referee Bob Williams waived off the contest.

Allen had accepted the fight on late notice to replace the cancelled clash between Kell Brook and Brandon Cook and has now secured himself a shot at Hughie Fury’s British heavyweight belt.

Prior to the Allen shock, Anthony Fowler (7-0) impressed the O2 crowd in his first step up in opposition against a game Craig O’Brien (8-1).

Despite a bright start, O’Brien was dazed a few times in the contest and struggled to gain success after the opening two rounds. Eight seconds into round six, Fowler unleashed a lead left hook which ended the fight immediately with O'Brien's head bouncing off the bottom rope.

The first bout of the night saw cruiserweight Richard Riakpohre (7-0) defeat an out-of-depth Elvis Dube to improve to 7-0.

Light-heavyweight Charlie Duffield (6-1) followed the opener by using a stiff jab and short solid bursts to wear down Reinis Porozovs. After round three, Porozovs retired on his stool improving Duffield’s record to 6-1 and still with all wins by knockout.

Momentarily finding himself in a war during round four, Buglioni eventually took his time and found his rhythm from round five onwards.

Buglioni’s sharp right hands to the body in the sixth were sufficient for Feuzeu’s corner to decide enough was enough.

After bossing the opening two rounds, Taylor, 32, produced a barrage of blows on the 37-year-old in the third to earn her 10th professional win.