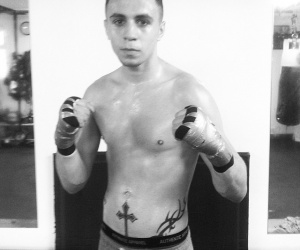 The 20-year-old Londoner talks about his debut this weekend, sparring with Prizefighter winners and finalists, and his plans to emulate his boxing hero Matt Marsh.

What made you want to start boxing? “It was my older brothers that made me want to go to the boxing gym first of all. I was 11 years old and it was at Finchley ABC. Of the three brothers, I was the only one that stuck to it. We all won our fist fights and I fell in love with it and carried on.”

Who was your boxing hero growing up and why? “Boxing hero growing up? I never really had one, but now it’s my trainer, Matt Marsh. He gets me up early to go running and he brings the best out of me – always shouting from the corner and reminding me what to do. He achieved a lot as a pro, winning the British belt, which is something that every boxer wants.”

How old were you when you had your first fight and how did you do? “I was 11-years-old and I won the fight.”

How well did you do in the amateurs? “I had round-about 30 fights in total, won half, lost half. I lost a few fights when I was younger when I was still learning. I think that my style was always suited for the pro’s. I boxed for a few different such as Eltham and District, Finchley and Edmonton Eagles.”

What made you decide to turn pro? “I was always going to turn pro, it was my dream from day one. Every time that I stepped into the gym, I was training for the day that I could walk into the ring as a pro.”

What team do you have around you? “Matt Marsh is my trainer and Alec Wilkey is my manager. I’m always down at Al’s gym training with the boys, we’re all very close and much like a family. I trust them both so it’s a really strong team. I train with Danny Connor, Tommy Coyle, Carl The Doctor, Eren Arif and have sparred with Romeo Romeao recently.”

What sort of fighting style do you have? “Fight style…erm…I adapt to fights, I come forward and counter at the same time. I’m not recklessly going in, I move my head and slip and whip it to the body. Not like Maidana, I come forward smart. Marsh and I have had two years together now and my style has come on so much thanks to him. I throw my shots then I’m back on the jab and don’t just stand there and admire my work, I’m back on it. My work-rate has really come on a lot.”

What ambitions do you have for your pro career? “Right now, my mind is Saturday. I’ll get this fight out of the way and sit down after and look at it, I’ve started my pro career with a win, then look on for the next one. I’m not going to say I want to win a world title, I know deep down I can fight, all the people I’ve sparred with lately, I know what I’m capable of and I’ll show it on the night. I’m not gonna get ahead of myself. The dream is always to walk away with a world title but it’s one step at a time.”

When is your first fight and who will be there in support? “First fight is this weekend at York Hall, I’ve got over 100 tickets out. My friends, family, old school mates are all coming. It’s amazing to see how many people that you haven’t talked to for a while and they say they want to come along and watch. I think we’ll be alright selling tickets it’s hard when no one knows you, but I’m going to show people what I’m about and get down to business. I’m not that nervous, every fighter nervous energy but I know how to control that. I know that he ain’t doing what I’m doing in the gym. I’ve hovered around the same weight for a while now, no need to starve myself, I’m 10st 5lbs at the moment but feeling strong and been on weight since the first day of training. I’ll be 10st for championship fights.”

Any message for the fans? “I want to thank everyone for spending their hard-earned money, the support has been unreal. On fight-night, I’m going to make it an explosive night, and show everyone they’ve spent their money wisely and I’ll get you your money’s worth.”