BBN were thrilled to catch up with three-time world kickboxing champion Rachel Ball before her crossover and first professional boxing bout. We spoke to Rachel about her decision to turn towards professional boxing, Rachel’s fighting style and the team around this exciting new female professional boxer. In a year which has seen female boxing continue to grow in fantastic fashion we know another British Female prospect will only positively add to the sport we love.

“I knew I wanted to excel in a sport, I did karate from the age of seven and got into kickboxing following on from that, I went to my first show and watched one of the girls fighting and just thought, 'I want to do that, that is for me!'

I’ve got a kickboxing background and have been kickboxing for about nine years now, during which I won three world titles fighting in England, Scotland and New York!

I feel I have achieved what I wanted to do in kickboxing, and I think professional boxing is the way forward for me.

I have won all of my fights in the last three years, so I think I’m mentally prepared now, also with the girls that are coming through at the moment, the likes of Katie Taylor it really is the time to get stuck into boxing.”

"Well, the reason I got into the martial arts was because my dad was watching the Bruce Lee films.

After I got into the kickboxing, watching people like Julie Kitchen, she won so many world titles and, for me, that was really inspiring, if I could be Walsall’s answer to Katie Taylor at my weight, I would be over the moon!”

“My first fight was when I was 17-years-old, I lost that one, I lost my confidence after the first round but my opponent went on to become a professional Muay Thai world champion, so I cant be too harsh on myself about that.”

“I have had four white collar boxing fights, my last fight was in Malta, a six-rounder, away from home against Malta’s top girl, I won that, it was a good achievement and I was really pleased with that.”

“For me, I don’t think I will be able to go through the amateurs as I have a professional career and I wouldn’t be able to stop that completely to try and get onto the GB team.

Going professional is a way to still stay at home, continue with my profession and really get stuck into the pro game, as that’s where I want to be.

“I am based at Trojan Martial Arts in Walsall Wood, I have been training under Gavin Burrows for the past five years now, we started out from nothing really and now we have a lot of talented girls at the gym and It’s an honour to be a part of it all.

One of my main sparring partners is Katie Healy she’s brilliant sparring for me, along with Lauren Johnson at BCB, Danny Hodges and there’s other girls who I have been sparring too.

I have been really fortunate to get the calibre of sparring I have been able to have, as a girl its difficult to get those sparring partners so its been great to have them.”

“I am not at the moment, but I would 100% consider it in the future, its where I want to be, if I could even just cut down my work to three days a week but the dream would be to do boxing full time and maybe just do guest lectures at university about social work, but yes, I would love to do boxing full time.”

“I am very tall for my weight and even for a female (5’9”) so I have to work my long shots, keep them away, I do go forward and look to land shots with precision.

I am also not afraid to get stuck in for a tear up when it needs to be, because of the height difference of some of my opponents, they do come right in, but I am trained to fight in close as well so I am more than happy to do that.”

“Going into the pro game now, I am looking to be one of the top girls, that’s my main aspiration right now, more than anything, to be up there with the best girls.

I know its not going to be an easy journey at all, but that’s where I want to be, I think I’ve got what it takes, physically, mentally and the dedication that’s needed to get there!

I think in 2018 we will try to have some more local fights and if in twelve months I could have a title fight it would be fantastic, but the main aim is to get some wins under my belt, without the wins I wont be progressing to anywhere, so yeah, that’s the main aim for me at the moment.”

“I am fighting in my home town Walsall so I’ve got everyone coming to support me which I am really grateful for, all the people from Trojan, BCB, also friends and family, it’s a local venue so its fantastic everyone can get there, especially so close to Christmas its really special.” 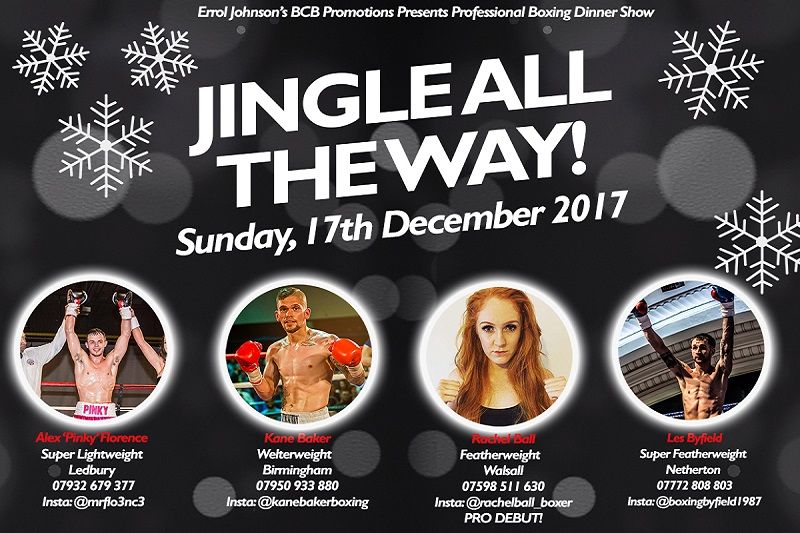 Also a Massive thank you to Gavin Burrows, Errol Johnson the coaches at BCB and Todd for living with Rachel through dieting!

Rachel’s first fight at featherweight is under Errol Johnson’s Black Country Boxing on the ‘Jingle all the way’ show this Sunday the 17th of December at Walsall FC’s Bescot stadium.

Billy Joe Saunders on Canelo and Golovkin: “I’ll give them a boxing lesson"