“My cousin is the one who got me into boxing, he first took me at the age of 12, he put me in with Tunde, I didn’t think I would do it as a profession, so I did it for eight or nine months and then stopped.

When I was 18, my cousin kept on telling me to start again, he said I have to get back on track and start boxing again, over and over again.

I started back, got back into it, three to four days a week and I started training again with Tunde and since then I’ve been on it 100%”

As a Pakistani growing up, you obviously hear about Amir Kahn, so I would look at him as well, see what he has done, but those are the ones I enjoyed watching.”

“My first amateur fight was when I was 20 actually, I had three fights as an amateur and won all three and my first fight was against a Haringey Box Cup winner! Before the fight, they said the only guy we have at your weight is this guy, but are you willing to fight him? I was confident in what I was taught so I said yes, fought him and won!

Following that, there were so many pull-outs and at that time my style was developing too far as a professional so we moved on.”

What did a short amateur career teach you?

“Well, three fights, won three, but, to be honest, all three of them, the people I fought, all had a lot more experience than me, which showed me it's not all about experience.

I believe its also about teaching, you can have 100 amateur fights but if your not taught, well, it shows.”

“My style, I deal with the crowd well, I don’t freeze, but definitely the style; I believe the style will take me far, so it gives me confidence.”

“Well I’m with Tunde but Ade is the guy I’m always doing the pads with and Martin Malcolm. In terms of sparring partners, Anthony Yarde, I’m learning a lot from sparring with him. Its all good work.”

“Well, to be honest, it’s a style of hit and don’t get hit, it’s a mix of styles, in terms of boxers that I have studied, its a lot like Floyd Mayweather, Roy Jones Jr, the fighters I’ve said before, I like watching them and trying the things out that they do.”

In 2018, I want to get the wins for now, I'm the fighter, Tunde is the mentor, they deal with everything outside, but whoever is put in front of me, my job is to take care of them.

I want to get the W’s put on good performances and learn with each fight.

My motivation is to help my family, I know its it’s a massive thought, but I want to help a lot of people around the world, make an impact.”

“My first Fight is February 24th at the York Hall, Bethnel Green. I have a lot of people coming to support, family friends, everything.

Thanks to everyone who has been there to support me and been there all along to where we are today.”

Mohammad Bilal Ali is fighting on a packed card at the York Hall Saturday 24th February, it’s a show featuring a wealth of top British prospects such as the likes of Daniel Dubois and Anthony Yarde. The show will be broadcast live on BT Sport and Box Nation TV. 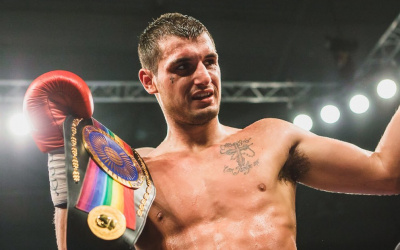