BBN took a trip up to Doncaster to visit Yorkshire boxing champion Kyle Fox ahead of his pro bow on March 25th at North Notts Arena in Worksop.

Here's what the super-welterweight had to say...

“To be fair, it’s in my genes – my dad, granddad, great granddad. It were my granddad that took my uncle to the boxing gym, we were roughly the same age, so he dragged me along, too. I was nine when I first went to Doncaster Plantworks”

“My boxing hero growing up was Roy Jones Jr. I saw his last fight the other weekend, I think he needs to give it a rest now, like.”

“I done well, I had 40-50 amateur bouts in total. All last year I boxed for the Yorkshire squad all over the world, I went to Holland and Spain, and against other counties.

When I went to Holland, I came away with a win and was presented with the best fighter of the night award.

As a schoolboy, I was Yorkshire champ four times - as a junior and senior. I was always injured for the ABA’s after winnng the Yorkshire's a few times.”

“I’ve been boxing 14 years now and feel like I’ve got enough experience especially with boxing abroad, so I feel like it’s time to give it a go.”

“My main coach is Michael White at Fighting Fit Gym and Joe Elfidh is my manager. I go down to another gym once per week to work with Chris Smedley. My sponsors are Alan’s Supercuts, 25 Customs, Edlington Motors, and Peters Footwear of York.”

“Pretty much a straight-forward boxer but quite aggressive on the front foot.”

“Right now, just to get as far as I can possibly get, I definitely want to make sure I’m British level but, for now, I want to keep busy and rack up the wins.”

“It's March 25th in Worksop. I have sold 80 tickets already and I’ll be doing a lot more than that. I done 50 ringside in the first day I had them!” 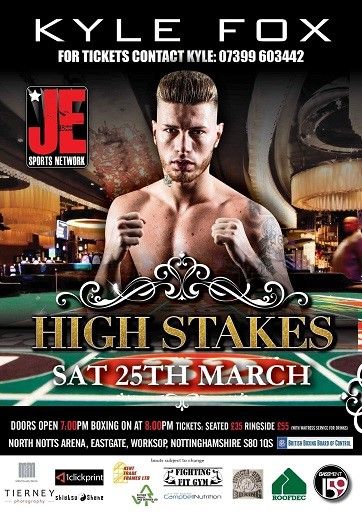 “Yeah, I work as well though but training comes first in my mind.”

“Garcia v Thurman. I’m a big Garcia fan and, to be fair, I don’t think people respect him as much as they should, but Thurman is dangerous.

Who would you most like to fight - past or present?

“That's got to be Floyd Mayweather!

Not just for the money, not because i think I can beat him...purely just for the hype that the Mayweather fights attract. It would be something special to be a part of.”

Kyle Fox vs Ryan Stevenson in the amateurs: