Introducing Bedford's next big thing to grace the square ring. BBN chat to crusierweight Julian Wilson about his pro debut, his amateur background, and who he thinks the most complete fighter is.

“I was always a sports man from the day I was born. I was good at every sport and heard that boxing was the hardest sport, so when I heard that, I thought I can definitely do that, and I wanted to do it anyway because I always liked it.

I was a big football fan and played a lot but when that died down a bit, I started boxing, aged about 19 when I started. Bedford ABC was where I learnt my trade.”

So, I tend to like different fighters for different reasons, but I’d have to say that Evander Holyfield was most of that rolled into one, he was a tough man with a big heart.”

“I’m sure I had first bout when I was 19. I dropped him twice and ended it in 30 seconds. I remember he came out all guns blazing and I dropped him with an uppercut really early. It was at 86kg so I’ve always fought at the cruiserweight limit.”

“I got to the semis of the Under 10’s Novices, then the finals of the 20’s, then I had a year off boxing because there was a change in the amateurs and they scrapped my weight class, but then I went back after a while and won the Under 20’s Novices.”

“It was time. When I started boxing, I knew no matter how I done in the amateurs, I always was going to turn pro.

When I got to the final when I was 24, I felt ready then, but in a small town like Bedford there wasn’t a lot of opportunity, so I lost a bit of interest. I knew I always had the tools to be a pro, but I became disheartened with the amateurs, I was still training but not focused.

When I hit 28, I said, ‘Its time’. Suddenly, there’s three or four pro boxers in Bedford now. I was going to move to London to get a better chance but then I met Mervyn Turner and he gets me good sparring and training.”

“Mervyn Turner, he’s my no.1, then there’s Sydney Thompson, my no.2. I’ve got great sponsors - Branks Gym, they have helped me massively; there’s also Ja Ja fitness, Burns Heating, and Eats Media.”

“I’m full-time, so grafting it out at the minute, looking for sponsors to help me financially.”

“I tend to adapt, I prefer to box but I call myself a box-fighter because I can do both. I can be slick, box or fight, but depends on my opponent.”

“My ambition is to get the very top, as far as my potential can get me to, I want to max it out, not in it just to make numbers.

By this time next year I want to have had eight fights, I’m always going to be in the gym so I’ll always be ready.

Championship fights, there’s always pull-outs so if I’m always available then who knows what opportunities I could get.

Boxing is a short career, so you need to be training to be ready all the time. Just got to keep it moving.”

“Friday 1st December at the York Hall on the undercard of Grant Dennis v Elliot Matthews.

I’ve got 150-200 people coming to this fight. There’s family from London coming, family travelling from Torquay, Bournemouth, and a lot from Bedford. The support has been crazy, I’ve had some random people getting in touch asking for tickets.”

Revealed: The boxing diet that allows undefeated prospect to move down a weight 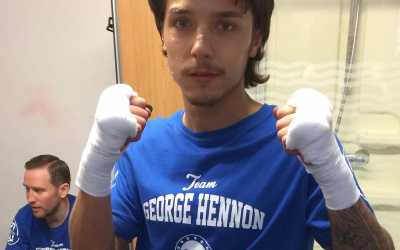