Curtis Jay, a 25-year-old super-middleweight from Doncaster, spoke to BBN about turning professional with Boxing Connected and getting ready for his inauguration on April 4.

“Well it was my friend that was going to the local boxing gym and asked me if I wanted to come along, when I was eight.

“I played football but I went with him to a YIP gym, which is like a youth club gym. I would go to boxing then to football straight after, but I was always half an hour late, so the coach said that I can’t do both, so I stuck with boxing.”

“Got to be Floyd Mayweather.”

“I boxed for England and had about 20 fights, my record was about half and half. I got to the ABA finals but lost to someone related to Joe Calzaghe. My last amateur fight was when I was 17, I got a back injury where I had injured my sciatic nerve, so I packed it in at 17, but then didn’t want to regret giving it a go, so I signed with Joe Elfidh, as it was always my dream to turn professional.”

“It suits my style of fighting, I’m a come forward fighter, a lot like the Mexican style, so pros suits me a lot better than amateur.”

“My coach is Tom Gilbert, I train at the TG Boxing gym in Skellow, Doncaster. My manager is Joe Elfidh, Dave Adamson is another coach, then there’s Lee Glover as well. I spar with Josh Padley, Cameron Kaihau and Ryan Stevenson.”

“I work as a scaffolder as well. I go to the gym before work in the mornings, then again straight after work for a good two hours.”

“I want to make it to the top really, that’s the one ambition I’ve got.”

“April 4 in Worksop. I’m quite popular in my area, between me and my family I could sell over 200 tickets alone.” 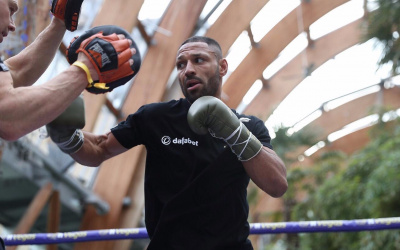 Kell Brook vs Mark DeLuca public workout quotes: “This version of me has never been in the ring - time to prove why I am ‘The Special One’”