BBN seized the chance to have a quick chat with Alfie Price on the eve of his professional debut tonight at the iconic York Hall.

Hailing from a big boxing family, the Team GB boxer told BBN's Jack Jacobs about his stellar amateur background, his decision to turn over and what world champion he has held his own with in sparring recently.

“Well basically, I started boxing because all my family were boxing, I grew up around boxing, all my older brothers were boxers and they won national titles. Since I can remember, I was walking around with boxing gloves on, so I was almost born into it!

I started boxing when I was about six-years-old, down at West Ham Boxing Club, I stayed there for a few years, then I gave up about eight or nine.

My old man said, do you fancy going back? so I started back boxing, had my first fight when I was 11, and it’s just started from there.”

I have got a few pro’s as well that I looked up to: Sugar Ray Leonard, Marvin Hagler, those sorts of fighters.”

“Well I won seven national titles, I won the Golden Gloves three times, I won the Four Nations title, the European bronze medal, got to the ABA finals, I won the GB championships in 2016 against Sam Maxwell and also boxed for England.

The 2016 GB championships was probably one of my best wins, he was a commonwealth games bronze medallist and basically I wasn’t meant to win the fight, but I did!”

“I didn’t really want to stay on the GB Team for anotherfour years, if I had to sign another four-year deal then I think I would have been too old to turn over, I would be 26 and I thought that was a bit old for the pros, so I made the step.”

“I’ve got a good team around me at the minute, I have my amateur coach Sab Leo at Hoddesdon Boxing Academy, he’s guiding me through the pro ranks, he has done a lot for me as an amateur so I trust him a lot. I don’t just class him as a trainer, he’s a good friend as well.”

“I have my own business so I work around that, when I’m not busy with work I’ll be training and when I’m training I can take a step back from work, I can decide what I want to do.”

“I’m a good classic southpaw, I very rarely get hit and I’m a hit and don’t get hit sort of boxer. I can switch it up, I can stay in front of you, I can fight, I can box, I would say I’m a good all-round fighter.

My style suits the pros, I’ve slowed down and I’m a classy south paw. Let’s put it this way, I like having a fight, but I don’t really get hit a lot, and I’m aggressive so I think it does suit me better.

In the amateurs, you are bouncing a lot, so I’ve slowed my feet down, and have to use in and out movement so I think I will turn over quite well.”

“I just want to go to the top, quick!

I’ve been sparring the likes of Linares along with numerous world champions, and I’ve held my own with them.

“I’ve sold about 140 tickets, so I have got a good following coming, hopefully they will raise the roof.” 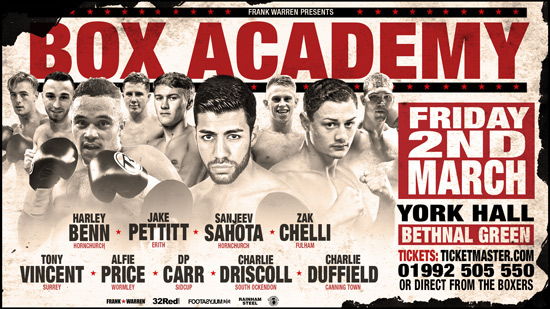 Alfie Price makes his professional debut on the Box Academy show at the York Hall, Bethnal Green this Friday 2nd March, appearing on fight seven of nine on the card: