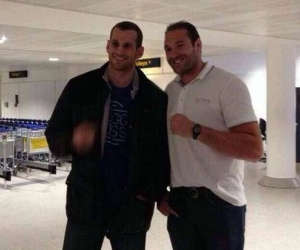 David Price: I think the new Tyson Fury is going to be loved

"I think the new Tyson Fury is going to be loved," says fellow heavyweight David Price

David Price wants to make a quick return to the ring in the new year as he looks to build momentum following a successful comeback on Saturday night.


David Price names the opponent he wants next

The Panel - Should Tyson Fury go for the knockout against Deontay Wilder?

> The victory, which was broadcast live by iFL TV on YouTube, marked Price’s first fight since suffering a stoppage loss to Christian Hammer last February.

While the 34-year-old was pleased to clock up some much-needed rounds, he is eager to get back in action in 2018 before plotting a course towards major title fights.

“I could do with another 10-rounder in February,” said Price. “I need ring time. Before my last fight I had four rounds in [a little under] two years – it was nowhere near enough. That was six good rounds in the bank on Saturday,” continued the 2008 Olympic medallist, who hopes to book a few domestic dust-ups in 2018.

“It’s not my style to call fighters out, but I know there’s fighters in a similar position to me, who will obviously fancy the job against me,” said Price. “I just want to get another 10 rounds under my belt and then we can go again and chase a title or whatever presents itself.”

The MTK Global-managed Liverpudlian has been linked to a long-awaited showdown against Tyson Fury following the lineal world heavyweight champion’s decision to pen an advisory deal with MTK.

However, Price suggested that a bout against his old amateur rival is unlikely to take place until both men rebuild following their respective ring absences.

“We used to have a bit of bitter relationship, but now we respect each other as men,” said Price on Fury. “Okay, I’m not up to his standard as a fighter, no bones about that, but as men we’re quite similar people believe that or not.

“I think the new Tyson Fury is going to be loved by the majority of people - time will tell. I know Tyson would love to give me the opportunity, but he’s got other things I think he’s planning from when I spoke to him the other day, so we’ll just do our own thing.”

A patient Price improved his pro record to 22-4 (18KOs) with his six-round points win over tough Polish journeyman Sokolowski after taking control from the midway point.

“That was a better fight than I’ve had in God knows how long,” said Price, who is training under Derry Mathews, George Vaughan and Joe McNally in Liverpool. “I knew he’d be durable and I just wanted to work on what we were doing in the gym. There’s still a few faults to work on, but as far as so-called ‘journeymen’ go that was a great fight to get.”

Revealed: The strict diet of a British champion