BBN have provided viewers with all the details needed to tune in and watch the championship clash between unbeaten Essex southpaw Danny Dignum (13-0, 7KOs) and once-beaten Russian Andrey Sirotkin (19-1, 7KOs) on the 107th day of the year.

The bout occurs on Friday, April 17, which is the same day in history English champion Tom Sayers and American John Heenan fought for two hours and 27 minutes to a draw in Farnborough, England, which was acknowledged as the first ever world title fight in history.

It takes place behind closed doors at the Bolton Whites Hotel in Bolton, Lancashire, on an MTK Global show.

Dignum's WBO European middleweight belt that he won against Conrad Cummings in November 2019 is on the line here.

The ring walks for the main event are expected from 10pm UK time, but that will depend on the undercard results.

You can watch online via the iFL TV YouTube channel HERE

Eight unbeaten prospects are in action on the night, plus a debutant, but there's only one other title fight on the bill as the impressive South Londoner 'Super' Dan Azeez (12-0, 8KOs) defends his English light-heavyweight strap for the second time to newest challenger Ricky 'Digger' Summers (17-2-1, 6KOs), 33 from West Midlands.

“There aren’t many fighters out there who would choose to face someone as tough as Sirotkin, but Danny is keen to prove to everybody just how talented he is and send out a big statement to the rest of the middleweight division.

“It’s a packed card, with Dan Azeez defending his English title against Ricky Summers, Joe Ham taking on Jack Bateson, plus the likes of John Joe Nevin, Lewie Edmondson, Paul Ryan, Paul McCullagh and Inder Bassi all in action, so we can’t wait."

Tim Rickson, BBN Editor: "I find this incredibly hard to call and think it could go to the wire. I'm impressed with Dignum and his progress but Sirotkin is a big leap up in levels. His last three opponents have all been a step in the right direction and Dignum will be motivated by the fact that his only two 10-round title fights have ended by knockout, as he goes into his third championship bout.

"Since his sole defeat to John Ryder in 2018, the Russian southpaw has KO'd three opponents and won a WBC Asian title. His last fight was an emphatic win over Kent's Grant Dennis via eighth-round TKO.

"I'm backing Dignum to win a hard fight on points, but it's going to be very close, in my view."

Undefeated Dignum is ranked #5 in the world by the WBO, and last competed in March 2020 when he stopped 17-1 Alfredo Meli.

Sirotkin is ranked #13 in the world by the WBC, and holds wins over the likes of Grant Dennis, Ryan Ford and Ricardo Mayorga. 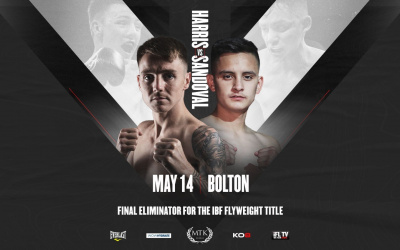