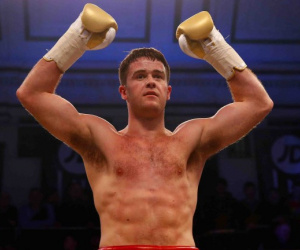 Tough test for Danny Dignum in next fight

The hard-hitting middleweight (9-0) from Bowers Gifford, Essex, will look to extend his unbeaten record when he returns to action fresh off of his impressive third-round stoppage win against Alistair Warren in December.

However, his forthcoming opponent will not be the same as any of the previous company he has shared a ring with, as the 26-year-old southpaw steps up to face a winning fighter for the first time in his two-year and two-month-long pro career.

His opponent Greg 'The Real Deal' O'Neill (6-5) from County Durham has won six from his 11 bouts and only defeated an unbeaten prospect just last May. O'Neill, trained by Pete Shepperson in Darlington and managed by Steve Wraith, turns up to fights with a real ambition to win, so will present Dignum with a stern test as he enters the ring for the 10th time as a professional.

The unbeaten super-middleweight is a very good mover, who knows his way around the boxing ring, having experienced a stellar amateur career. He was the only non-GB boxer invited to the Rio 2016 training camp to spar with the squad at the latest Olympics. Should he make it to 10-0, then title fights in 2019 would be a certainty.

Light-heavyweight talent Dan Azeez (6-0 KO3) is on the card too, as he competes for the first time since defeating former Commonwealth champion Charles Adamu in October.

Exciting prospect Danny Egbunike (3-0) will be searching for his third stoppage victory on the bill, plus Jack Ewbank (1-0) will try to make it two wins from two in the paid ranks.

Middleweight Donovan Mortlock (1-0) is in action, and there's a debut for Michael Elliott as he takes his first step as a professional, Billy Underwood (1-0), Josh Adewale (1-0), Josh Paine (1-0) and debutant Huzaifah Iqbal complete the list of fighters on the undercard.

Time to for prospects to turn into contenders

Willy Hutchinson: I have a dream to be a three-weight world champion