Dubois needs a win to propel him into the biggest fight of his career, which will be one of the biggest British heavyweight battles of all-time, against rival Joe Joyce before the end of the year.

Daniel Dubois (14-0, 13KOs) was due to face two-time Olympian and WBO European heavyweight champion Erik Pfeifer (7-0), but the Russian-born German didn’t get his medicals in on time, according to Queensberry Promotions.

So, with just over a week to go, two-weight Dutch national champion Ricardo Snijders (18-1, 8KOs) has stepped in to fill the empty away corner, in what will be his second fight outside of his native Netherlands.

His first fight in another country ended in his one and only career defeat to Belgian Joel Tambwe Djeko (17-2-1) in May 2019. They clashed for over 12-rounds for the vacant IBO Inter-Continental cruiserweight championship, which he lost via a wide points decision. He battled bravely but was floored for the first and only time in his four-and-a-half-year career in the 10th round.

He has only fought at heavyweight a handful of times, but he has won a couple of those few fights via knockout. However, over his 19 pro bouts, he has only managed to clock up a 42% KO ratio, which is considerably dwarfed by Daniel Dubois’ frightening 93% record.

10 of ‘DDD’s’ victims never made it past the third round, and there’s no reason to believe that Snijders will either.

I fully expect Dubois to send the Dutchman flying within the first two rounds.

This is a fight that gets everybody talking!

The 30-year-old from Wiltshire has had three European title fights in a row, each one ending on points – 36 European championship rounds in total over the past 21 months.

Now he vies for another version of a European title against hard-hitting Liverpudlian Maxwell, who shot to fame following his emphatic last-gasp victory from the clutches of death against show-off Sabir Sediri (13-1-1) when he was well behind on the scorecards and down in rounds one and two. The Frenchman wrongly flaunted his approaching triumph and was found flat on his back with less than a minute to go in the 10-round championship contest at the Leicester Arena in March 2019, then was stopped with just 15 seconds to go after being well up on the judges’ cards at ringside. The clip went viral and Maxwell became an internet sensation overnight.

Despite not winning wither of his last two fights, Hughes is a formidable foe that will give Maxwell a lot of thinking to do, plenty of problems, and undoubtedly the full 10-rounds the contest is scheduled for.

It’s going to be an entertaining affair, but one that the 31-year-old Liverpudlian, Sam Maxwell, should come through on points.

Former English and Commonwealth bantamweight champion Thomas Essomba (10-5, 4KOs) is the biggest banana skin you can find, not just in the 118lbs division, but in the entire British boxing rankings.

The 32-year-old Cameroonian took world title contender Jay Harris (17-1) to a close points decision, losing out by just one round on one of the judge’s scorecards back in 2017. He won the English title against Louis Norman (14-8-1) in his next fight, even after an entire year out of the ring. He KO’d ‘2Sweet’ in the sixth.

He then lost his title in the very next fight to Kyle Williams (11-2) in a back and forth battle that saw both fighters touch down during the 10-round contest, which then-unbeaten Williams clinched on a split decision.

He then provided future British and Commonwealth bantamweight king Lee McGregor (9-0) with the biggest test of his fledgling career when he was just a 4-0 pro. Up to then, ‘Lightning’ had stopped all but one of his opponents by the second round, his fourth victim reaching as far as the fourth round against him. Essomba gave the Scot the hardest fight of his career to date, taking him right up to the 12th and final round until McGregor forced a stoppage with just over a minute to go.

He bounced back from those back-to-back losses in the second half of 2018 with two consecutive wins in the second half of 2019. First, he ruined Commonwealth Games gold medallist Sean McGoldrick’s (10-1) unbeaten record and won the vacant WBA Continental bantamweight strap in the process; then he did the same thing to Kazakh Iskander Kharsen (7-1), when he stopped him in the third round of their scheduled eight-rounder last December.

A 2012 Olympian and All-African Games gold medallist, Essomba is a stern test for the unbeaten British champion, Sunny Edwards (14-0, 4KOs).

Currently ranked in the top 15 with the WBC, IBF and the WBO, 24-year-old ‘Showtime’ Sunny is looking to follow his brother Charlie and become a world champion, which looks very possible from his performances so far.

Having gone the distance in five from six of his championship fights during 2018 and 2019, his style of fighting is to hit and not get hit. He has plenty of style and skill, but not a great deal of power although the speed of his shots are stinging. He switches stances and loves to show off and taunt his opponents.

In his last fight with Marcel Braithwaite, he took a few unnecessary risks, which saw him floored in the seventh round after getting caught with a right hook-left hook combo, but still won the British championship fight via UD.

Essomba will be planning to sit on his chest all fight, but Sunny should be able to box on the outside, score his shots then skip away to rack up the rounds towards a points victory. However, he has 30 minutes to get through with a dangerous opponent that loves to ruin records.

Scotsman Willy Hutchinson (11-0, 7KOs) was due to face former Commonwealth super-middleweight champion Luke Blackledge but has instead been matched with Bolton's Ben Thomas (2-2-3, 1KOs).

'Big Ben' may sound manacing but with only two wins from seven bouts and both his defeats ending in a knockout, this is not going to be a tough test for the unbeaten 'Braveheart' in the home corner.

After losing his pro debut in September 2018, light-heavyweight Thomas went on a five-fight unbeaten streak between December 2012 and November 2019. However, he failed to beat the journeymen placed in front of him, then lost bid for the Central Area super-middleweight title to unbeaten Mark Jeffers (11-0, 3KOs) in January this year.

22-year-old Jeffers looks to be a future star, but he didn't have a high KO count before facing Thomas, so it's clear someone like Hutchinson should be in with a good chance of winning this contest early - fourth-round knockout perhaps...

Maidstone’s Sam Noakes (3-0, 3KOs) is bound to provide some explosive action for the six-fight card.

All three foes have fallen to Noakes inside the distance; although all journeymen, they were tough, durable opponents not known for being stopped easily.

The 23-year-old lightweight won almost half of his amateur bouts by stoppage, so he has natural power in his fists and a spiteful attitude.

He trains at the iBox Gym in Bromley with trainers Alan Smith and Eddie Lamm, alongside another red-hot prospect, Dennis McCann.

His fourth opponent has been named very late in the day as British Challenge belt champion Jordan Ellison (11-29-2, 1KO).

The 24-year-old from County Durham is a very experienced amateur and pro, who has decided to earn his money from the away corner. If he wanted to be a home fighter, then he would be able to win his fights and win titles, but this is the path he has chosen. When he gets a good opponent in front of him, such as Luke Gibb and Commonwealth lightweight champion Sean Dodd, he gets up for the fight and puts in a great performance, which he may well do in this six-rounder with Noakes. Live on BT Sport against one of the country's hottest prospects, he should be incentivised and eager to put on a performance whilst in the spotlight.

Noakes, however, should win this fight handily, but hopefully it'll be closely contested and the Kent prospect given a few rounds and a good test in the process. It's possible that Sam will score a fourth consecutive knockout, but there's a also a chance he'll be taken the distance by Ellison. If the knockout comes, I'd expect it to be after the fourth round at least.

Londoner David Adeleye (2-0, 2KOs) is back in the ring just seven weeks on from his last fight on the undercard of Brad Foster vs James Beech Jr.

After despatching of West Brom’s Matt Gordon (2-3-1) in less than six minutes, the 23-year-old is fit to return to the action so soon after to continue his devastating run.

34-year-old Swindon scrapper Phil Williams (3-25-1, 1KO) took Daniel Dubois' sparring partner Dorin Krasmaru (3-0, 2KOs) the distance in his last fight. He has only been stopped three times in almost 30 fights, so he is durable and tough. The last person to stop him was Romanian-born Londoner Lucian Atana (4-0, 4KOs), who is clearly a KO artist. So as he prepares to face another KO artist in David Adeleye, you can probably expect another stoppage. 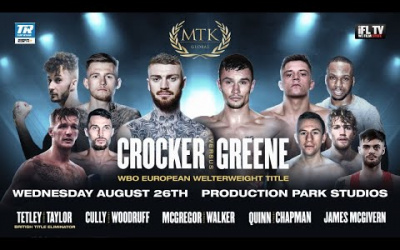