The huge heavyweight showdown between Daniel Dubois and Joe Joyce at the O2 Arena on April 11 - live on BT Sport Box Office - has just got even bigger with news that the vacant European title will also be on the line.

Joyce was originally mandated to fight Marco Huck for the coveted belt in January before the Berlin man succumbed to injury. The pair were set to fight following the vacating of the belt by Agit Kabayel.

The EBU have now determined that Dubois and Joyce, the two rising stars of the world heavyweight division, will fight for the European honour.

Dennis McCann takes step up in class in next fight

Nathan Gorman vs Richard Lartey is off

The big collision at the O2 now has the European, WBC Silver and WBO International, along with the British and Commonwealth titles riding on it.

The last British holder of the EBU belt was Tyson Fury, who defeated previous owner Dereck Chisora at the ExCel Arena in November 2014. Henry Akinwande, Lennox Lewis, Derek Williams, Frank Bruno, John L Gardner, Joe Bugner and Henry Cooper are amongst other British fighters to have held the heavyweight belt.

Promoter Frank Warren is delighted with the development.

"The EBU sanctioning this fight for the vacant title is the cherry on the cake," said the Hall of Fame man, who is currently in Las Vegas with Tyson Fury.

"They have recognised the magnitude of the fight, the fact that it is between two unbeaten fighters who are the best two up and coming heavyweight forces in world boxing.

"I am particularly pleased for Joe given that his European shot didn't happen in January, while for Daniel it nicely continues the 'every belt' journey we have set him on.

“Daniel vs Joe is a fight that you simply cannot afford to miss.”

Everything you need to know about Dubois vs Joyce HERE 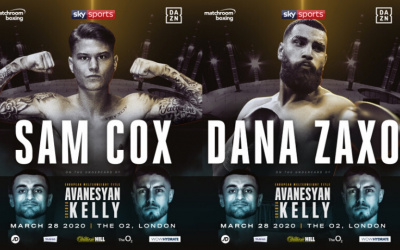