Dan Azeez: "You never gave up on her"

Fortunately, Kike, a carer, has since been discharged and made a full recovery.

Dan, 30 from Lewisham, praised the staff: “I cannot thank you all enough for saving my mother’s life. Before being admitted to hospital my mum was in a real bad way – she was struggling to breathe, could not speak or move. We all feared the worse, but even when times got tough, you never gave up on her.

“I was not able to visit her in hospital but when she could finally speak to us on the phone, she was always praising the staff saying the nurses would go out of their way to help her. I think it is really important to thank the NHS right now; you are all doing a tremendous service for your country. Your lives are just as much on the line as the patients that you are caring for, which makes you all true heroes in my eyes.

“My mother is my best friend. She has been an important figure in my life, especially helping me build my boxing career. I attribute a lot of my success to her support – that is why I am saying thank you. My family and I will be forever indebted to you all.”

Azeez first revealed his family's struggles back in May, which was when his mother was begginning to recover.

Dan is currently in training camp to defend his English light-heavyweight title against challenger Andre Sterling (11-2, 4KOs), 29 from London, live on Sky Sports in September. He plans to wear his thanks in print on his ringwalk t-shirt on September 1, saying 'Thank you to University Hospital Lewisham' alongside logos from his other sponsors. 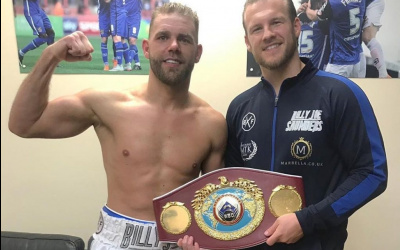