All the results from the Chantelle Cameron vs Anisha Basheel event

All the results from the MTKFightNight at Brentwood Centre in Essex on July 20.

‘The Problem’ eased to 17-0, 2 KOs in front of the ESPN+ cameras on a night that also saw Chantelle Cameron become WBC world lightweight title mandatory challenger with a brutal victory over Anisha Basheel.

Cameron said: “She caught me with a shot in the first round and I thought: ‘Yeah good shot.’ She wasn’t all that though.

“If I can get in there with a big puncher like her and make her look stupid then I believe I’m one of the best in the world. I’ve said all along it’s not just about me vs. Katie Taylor. It’s about my career too.”

McKinson said: “I thought it was a bit closer than what the judges scored it. He had a good, solid jab that was more like a right hand – it was solid and accurate and I had to adjust.

“These are the sort of fights I want, where I have to dig deep. I had the worst camp I’ve had with no quality sparring but I got the job done.”

Day said: “This says that we’re now 13-0 and the Southern Area champion. It also says that hard work pays off and we’re going to keep climbing that ladder nice and slowly.

“Me and my coach Mickey Burke have been working hard together since I started boxing at the age of 16 so we’re 10 years strong in this game and this is just the start.”

Ward said: “He was a good, competitive fighter and when he came out swinging in the first round I thought: ‘Here we go!’

“I’m pleased with where I’m at and I’m looking forward to being nice and active now. The dream is to win a world title and then to become undisputed unified champion.”

Eubank said: “He was trying everything to buy time. He was trying to mask being hurt and maximising his rest periods.

“I love it. I love the learning process and with all the experience I’m around in the gym, I’m constantly learning. These are the nights I try and refine that learning in the ring.”

Adewale said: “It was better than the first two fights I had because there wasn’t too much holding. My first two opponents just ran away.

“Jordan stood there and had a good go and that meant I could catch him with a few shots. I want to get a six-rounder next and just get on with it a bit.”

Whelan said: “There’s loads more to learn. When I’ve learned it, practiced it and perfected it, you’ll see it. I think I’m pleasing everyone so far.

“It’s hard to work on things when doing things requires your opponents to do other things but I’ll just keep learning and listening to my corner.”

Martin said: “I can’t believe it. I’m absolutely buzzing and I feel like I was just starting to find my rhythm. I feel like I could have done six rounds easily!

“I’d like to thank MTK Global and Lee Eaton for giving me this opportunity and also all my sponsors and those who came out to support me.”

#MTKFightNight heads for Belfast’s phenomenal community festival Féile an Phobail next up on August 3, when Michael Conlan vs. Diego Alberto Ruiz spearheads a classic bill. 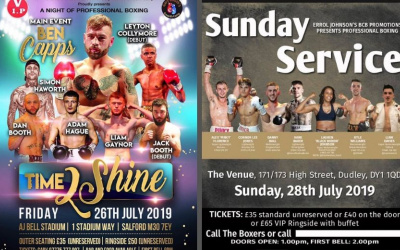