Chantelle Cameron ready for either Katie Taylor or Jessica McCaskill

Having already become WBC No.1 and earned a shot at Katie Taylor by outclassing the fearsome Anisha Basheel, undefeated ‘Il Capo’ (11-0, 7 KOs) is preparing to collide with Anahi Ester Sanchez (19-4, 11 KOs) on a colossal #MTKFightNight at York Hall.

The winner of the final eliminator books a shot at America’s WBC and WBA world super-lightweight champion Jessica McCaskill – a former opponent of Sanchez, who just retained her WBC super-lightweight crown for the second time, by defeating tough Erica “Pantera” Farias in a rematch.

While speculation over mouth-watering potential world title match-ups continues, Cameron remains solely focused on blasting aside Sanchez in the knowledge victories will make it impossible to deny her the chance to achieve her dream.

Cameron said: “I’ve been tipped to challenger Katie Taylor for a world title for a while but I’m not waiting around.

“I’ve got my own career to focus on and whether my world title shot comes against Taylor or against McCaskill, I don’t really care.

“Since the Basheel fight, I’ve been working on a lot of technical stuff with my coaches Jamie Moore and Nigel Travis; adding more speed, angles and head movement to my game.

“Basheel had raw power but Sanchez will try and box as well so it’ll be a higher-level fight technically.

“Basheel came over here with a bad attitude and I gave her a lesson. Sanchez will have more respect because she’s been in with world champions but if she wants to come with attitude, that’s her problem.

“I will not take anyone’s s*** so it depends how she turns up. If she comes with attitude, she’ll get some attitude back.” 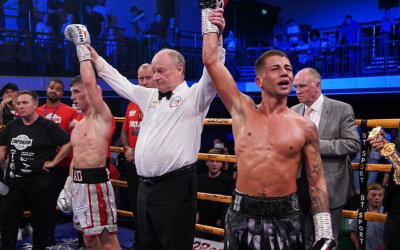