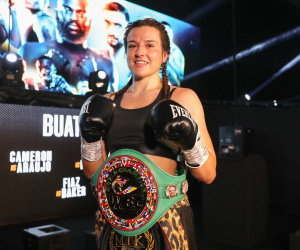 Chantelle Cameron and JJ Metcalf are both set to return to the ring soon – with the MTK duo each competing in important title fights.

'Wham Bam' Chan is the clear favourite at the bookies at 1/25, with her Puerto Rican opponent tagged as the underdog at 10/1. You can find the best odds at these boxing betting sites in the UK.

Aged 40, 'The Shark' was a WBC world featherweight champion back in 2012 but hasn't managed to return to the highest level since then. In her last fight, she ruined an unbeaten prospect's record - Selina Barrios, who was 5-0 at the time. With 33 fights as experience and just one loss in her last five outings, the Miami-based boxer is going to be a difficult first defence for the 29-year-old from from Nothampton.

Cameron said: “I can’t wait to be back in the ring, I’m looking forward to starting 2021 with a bang and doing what I do best.

“I was so proud of what I achieved in 2020 by becoming world champion, especially with everything that is going on in the world. I’m delighted to be part of the women that is leading the way, and women’s boxing is starting to get the recognition that it deserves.

“Melissa Hernandez is a former world champion, and I’m sure Jamie Moore and Nigel Travis will tell me what I need to know and the tactics to beat her. She likes to talk a lot, so let’s see if she can back that up.

“I’ll get this mandatory out of the way and then hopefully get the unification next. For now I have to focus on Melissa as she is my next fight, so I’m not looking past her and I can’t wait to fight.

“In 2021 I’m hoping to be as active as possible. I want to be undisputed, and the next step on that journey is Melissa Hernandez.”

Cameron vs Hernandez takes place on the undercard of Lawrence Okolie's (15-0, 12 KOs) first attempt to become Britain’s next World Champion when he clashes with Krzysztof Glowacki for the vacant WBO crown.

“I’m expecting the best version of Ted Cheeseman. I think it might be a cagey first few rounds and then catch fire, so I think it will be a great fight for the viewers. I did think it would happen three years ago when we both won eliminators for the title.