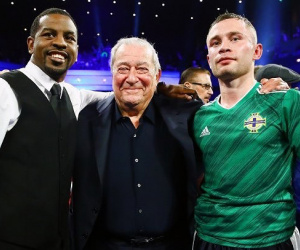 Frampton prepared to wait it out for chance to make history

Carl Frampton isn’t letting the current situation deter him from his goal – as he keeps his sights firmly set on a clash with WBO super-featherweight champion Jamel Herring and a chance to become a three-weight world champion.

Frampton (27-2, 15 KOs) was due to face Herring (21-2, 10 KOs) this summer in Belfast, as he looked to keep the momentum going following his unanimous decision victory over American Tyler McCreary in the Cosmopolitan of Las Vegas last November.

‘The Jackal’ is still determined to take on Herring, and while his preference would be for the fight to take place in front of fans, is keen to get the fight on no matter what.

Does Carl Frampton's injury setback make him an easy target for Jamel Herring?

He told The Ring: “It’d be a shame to do a fight where there’s potentially the chance for me to make history, in a third weight division, and to have nobody there to witness it. I wouldn’t be happy but if I have to do it, I have to do it but I’d prefer not to.

“I’m hoping things clear up and by some point, whenever that may be, even by early next year and things are back to some sort of normality then it can happen in front of a packed house.

“It would be a shame for such a huge fight and such a potentially historic occasion to be witnessed by no one, really. As long as I continue to tick over and stay in reasonable shape, I’d be prepared to sit it out and wait it out.

“Time isn’t really on either of our sides, me or Jamel Herring, (because of) our ages. If this goes on too much longer it’s not going to be great for either of us but I would be prepared to sit [it] out.

“I’ve had a great support my whole career and even the new ones who’ve recently jumped on with the bigger fights. I’m appreciative of all the support that I get and I hope whenever, wherever the fight with Herring happens there are as many people there as possible again to make some memories.”

Aged 15-19 and want to enter the world of boxing as a fighter, coach, referee, cutsperson, promoter, event coordinator, journalist and everything in between? Sign up for the #MTKAcademy now: www.academyse.co.uk/mtkacademy