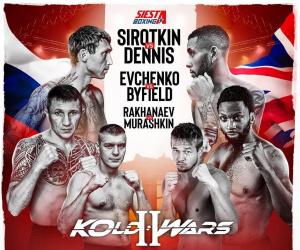 Al Siesta of Siesta Boxing chose Minsk for the next installment of his KOld Wars series, which was very active in mid-summer. The Falcon club hosted the event on October 6 with three 10-round fights constituting its triple-header and two shorter bouts filling in the undercard.

Southpaw middleweight Andrey Sirotkin, a hard-nosed Russian veteran ranked in the top 25 in the world, only beaten once by John Ryder (28-5, 16KOs) during his six-year pro career, produced one of his best career performances by smashing previously unstoppable Brit Grant Dennis at 2:30 of the eighth round.

The fight seemed to be ending as soon as it had started, when the reigning WBC Asian Boxing Council middleweight champion Sirotkin dropped Dennis twice in the first but was unable to stop him within a round.

Patiently, Sirotkin chose to box from thereon instead of capatilising on the knockdowns, but it didn't help English title contender Dennis much. WBC #21 Sirotkin was just better all-round and he proved it again in the sixth stanza by sending Dennis to the canvas for a third time.

After tame seventh round, 35-year-old Sirotkin got back to work again in the eighth, putting 36-year-old Dennis down with a smashing overhand right and then getting the job done once and for all with a huge left hook / right cross combo.

A former Southern Area titlist and Ultimate Boxxer finalist, Dennis showed pure heart and bravery with his performance and would have earned a lot of new fans with his spirited display. Trained by Veron Quammie and managed by Joe Elfidh of Boxing Connected, the Kent puncher will head back to England with his head held high.

After the fight, Dennis said, "I got caught early with a great shot and it scrambled me for a bit. I then adjusted and controlled a few rounds and, by the scorecards, apart from the knockdowns, things were level, but the better man won on the night.

"I took the risk of going to another country to fight Russia's no.1 and I'm glad I did because I know I can mix it at that level and I've learnt a lot about my craft and about myself, certain things you can't teach."

In the other Russia vs UK showdowns, no winner was defined as gritty fight veteran Aleksei Evchenko (19-13-2, 8KOs) summoned up all he had to grasp a spirited draw versus a better boxer in Asinia Byfield (14-3-1, 6 KOs) in their 10-round super-welterweight contest.

Both combatants repeatedly hurt each other in a see-saw battle, where Berkshire's Byfield seemingly had an edge, but a lack of power resulted in no serious danger. Final scores were: 96-94, 95-95 and 95-95.