“The Newquay Bomb” 26-year-old Brad Pauls moves one step closer to his dream of a British title when he headlines the “BRAWL IN THE GUILDHALL” show at Plymouth Guild Hall on Friday, April 10th.

Pauls has the biggest ﬁght of his career to date when he competes in a Final Eliminator for the English Middleweight title against “The Hammer” Mick Hall from Preston.

Hall with more experience than Pauls has won 15 from 17 contests and has mixed at a higher level having fought for the WBA International Middleweight title and also competed in the televised Prizeﬁghter tournament.

In many eyes, Pauls starts this ﬁght as the underdog but he is not fazed. “I will ﬁght anyone. I will give everything I have got to move this one step closer to the British title. There will not be any easy ﬁghts at this stage of my career.

Pauls has won all 15 ﬁghts with nine coming by stoppage and he captured the Southern Area title in November 2019 with a devastating seventh round knockout of Robbie Chapman at the same venue.

He continued to say, “I hope the fans will get behind me for this ﬁght in Plymouth. With due respect to Robbie, Hall is a higher-level ﬁghter and he thinks this is a win for him. I want everyone's help to prove him wrong and bring another dream to my home town and area”.

Tickets can be obtained from Brad directly or from www.myﬁghttickets.com

Goodwin Boxing is a prestigious sports management company based in Leighton Buzzard that have been revolutionising professional boxing management since 2014. Headed by BBBofC licensed manager Steve Goodwin, the company ensures honesty, integrity & professionalism are the foundations on which all business is conducted. In 6 years the company has guided 36 boxers to professional titles from Southern Area to World Champions. Goodwin Boxing also operates a franchised promotional arm which has allowed them to work with multiple diﬀerent BBBofC licensed promoters, oﬀering experience, guidance and granting them a platform to deliver to a wider audience. So much has been the success that Goodwin Boxing has been voted promoter of the year for the past two years (2018 & 2019) as voted for by the BBBofC Southern Area Council. 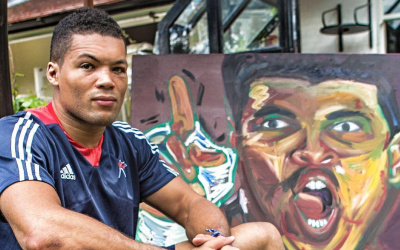