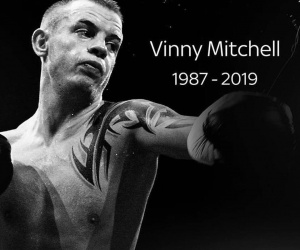 Boxing world in mourning at funeral of Vinny Mitchell

Today was the funeral of former pro boxer Vinny Mitchell who died in a road traffic accident in Dagenham on April 1.

As the 31-year-old younger brother of world title challenger Kevin Mitchell was laid to rest, tributes poured in for the popular Essex boxer.

Older brother Kevin said: “What a send off for my legend of a brother Vinny Mitchell you was loved in such a way you’d never know.”

Tributes pour in for Vinny Mitchell

Ex-English champion Ross Minter was at the send-off and said: “What a fantastic send off for Vinny Mitchell today. So good to see so many people there. RIP.”

Former British champion Matt Marsh was also in attendance to pay his respects: "What a beautiful send off for Vinny Mitchell so much love for you Vinny. Gone but not forgotten."

Vinny won 12 from 13 fights as a pro after a stellar amateur career with West Ham ABC, where he won the ABAs. His sole career defeat was a rematch with John Baguley at Wembley Arena in February 2010. He recorded two knockouts in his 12 wins and won his last fight as a pro on points against Daniel Thorpe at Upton Park in 2015 on the undercard of brother Kevin's world title fight against Michael Katsidis.

His untimely death was on April 1 just one month before his 32nd birthday.