Billy Joe Saunders is set to have a huge crowd watching him this weekend and he plans on using that opportunity to show everybody he would be capable of defeating pound-for-pound superstar Canelo Alvarez.

The fight takes place at the Staples Center in Los Angeles, on the undercard of the rematch between KSI and Logan Paul, live on Sky Sports Box Office and DAZN.

With a massive audience filled with new fans of the sport set to tune in, two-weight world champion Saunders, 31 fro Hatfield, is ready to put on a show and prove that he would reign supreme against Canelo.

Saunders told iFL TV: “This is about getting the ball rolling in my debut with Matchroom Boxing and on Sky and DAZN. I’m here to show the world what I can do.

“I’ve seen 30 seconds of my opponent. He likes to hold the centre of the ring and is unbeaten with 28 wins and one draw, plus he has 15 knockouts, so he’s obviously capable.

“I’ve got to make sure I’m on my game. I want to get this win and then move into the big fights with a good camp behind me. I want the big fights, and I know that if you put me in the ring with somebody like Canelo, I’ll show I can beat him.

“I’ve got a lot left in me, I’m still only 30 and haven’t had any punishment in my career. I’ve been in some good fights and now I want the world class opponents.”

Who is Marcelo Esteban Coceres? 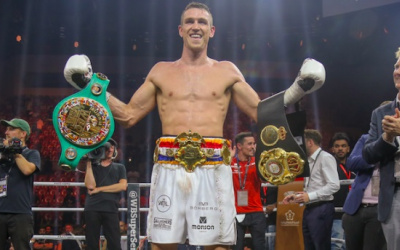 Callum Smith to Canelo: I'm still number one at super-middleweight