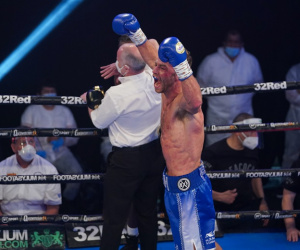 Denzel defeated at the hands of forceful Felix

Both men entered with unbeaten records, Cash the more accomplished amateur and bigger man, Bentley with the better standout victories as a pro.

As accustomed, Cash started on the front foot, landing some telling shots as Bentley, looking off balance at times, took a while to settle. Cash continued to dictate in the second, employing a stiff jab, whipping body blows and generally outworking his rival. One of Bentley’s strengths is his use of unorthodox angles but here he was getting beaten to the punch by the straighter strikes of Cash.

Just as Bentley began to work his way back into things, Cash broke through with a hard right hand as his opponent retreated to the ropes. Bentley seemed to freeze against the strands and Cash followed up with more heavy rights as his victim’s hands remained low. The referee dived in to save Bentley and crown Cash as a double champion.

The Tony Sims-trained fighter is now keen to move on to European level and this was easily the best victory of his career so far. Bentley is young and talented enough to come back.

**Frank Warren speaks to SecondsOut at the show**

On the undercard, world-class light-heavyweight Callum Johnson returned from a lengthy hiatus and overcame a mini-crisis to stop Emil Markic in the second round, while unbeaten heavyweight hope David Adeleye took a highly contentious referee’s decision over Kamil Sokolowski.