BBN tackle all of the topical, talked about issues in boxing with the help of a panel of experts consisting of professional boxers, coaches, promoters, managers and others in the world of boxing.

Inspired by Tyson Fury, Daniel Dubois declares clash with Joe Joyce is "going to be a fight for the ages"

Is Anthony Joshua v Eric Molina worth £16.99 on pay-per-view? 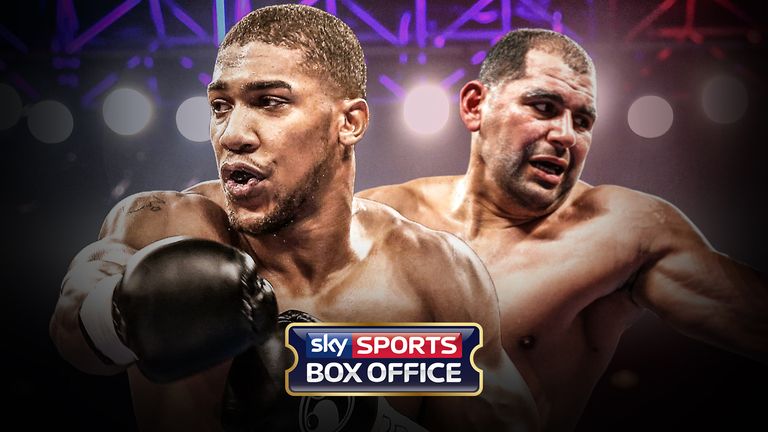 “I think everyone knows that Josh-Molina isn't PPV-worthy. But, with the money that Josh generates, it has to be that way. Unfortunately, killing off a lot of casual customers. I won't be paying the £17.”

“No, I wouldn't say so but Sky are good at selling fights and will hype it up.”

“Unfortunately not, no! I'm a huge fan of Joshua but that is an easy fight for him. The undercard, so far – yeah, but that fight on its own – defo not!”

“I feel that the overall card is definitely worth the money as there's some great fights and some serious talent on the bill, but I feel it is let down by the main event, if anything.

Molina can dish it out but can't take it, he will start fast but Joshua will iron him out inside four rounds.”

“I think Anthony Joshua is a PPV fighter but I don't think the fight with Molina is worthy of PPV, however he was the best opponent on offer after the Klitschko fight fell through.”

“Regarding the Anthony Joshua fight, no I don't think it's worth it at all!

Eddie Hearn is conning the boxing fans again and everyone is just jumping on the Joshua hype as per and they will see him knock out yet another bum and think that he's the best thing since sliced bread!

I could go in there against Molina now and put him to sleep! It's embarrassing if you ask me. Joshua is Hearn’s money spinner and Hearn clearly doesn't want to put Joshua in against anyone who he doesn't have to get out of second gear for in case that unbeaten record goes!

He had David Price offering him out all over social media; now why not take that fight? Big domestic dust up! Because Hearn knows if Price catches Joshua that he is going to sleep!

Step it up now Eddie because it's getting boring!”

“Probably not, to be honest. But then again, people will tune in as Joshua is a big draw around the world now and is exciting.

Personally, I'm looking forward to other fights on the card – mainly who Katie Taylor will be fighting and also the Kal Yafai fight.

After this fight, you would imagine Joshua will be in the big fights as he will have no choice. The likes of Klitschko, Fury, Wilder, Haye and more in 2017 are possibilities and this fight (Joshua vs Molina) and December elsewhere between Joseph Parker and Andy Ruiz Jr, will set the scene for a big new year. It's up to the promoters to get these big fights signed. The interest is there, the money is there; 2017 will really be the start of a new era for heavyweight boxing, in my opinion.”

“On that fight alone – no. The undercard is tantalising but the main event ain’t!

Wilder had no problem landing those right hand bombs so I fully expect AJ to blast him out of there in the first few rounds.

Whyte v Chisora will be an intruiging fight, and Burton v Buglioni is a cracking fight for the British light-heavyweight title! Best of luck to Frank, I met him properly for the first time at one of George Hennon’s last fights and he is a lovely guy.

Also, looking forward to watching Katie Taylor in action, and Callum Johnson is always good to watch; I think he has a lot of potential.”

What do you think of all the Dillian Whyte v Dereck Chisora pre-fight antics? 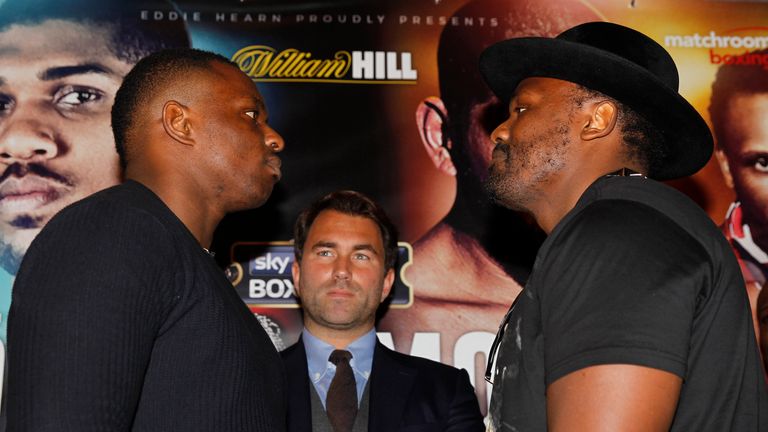 “I think the antics are to be expected and the result of the fight could be who keeps calmest during the run-up to the fight.”

“I think it's all part and parcel of the fight; their mouths have got them in a good position so far.”

“I haven't seen any of their antics but I can just imagine as they’re both strong characters.

I saw them both spar together in John Rooney’s gym about six years ago, was great to watch, Dillian did catch Derek with a good body shot.

I like Derek and I see through all the bravado, he’s a nice guy deep down.”

“I think Whyte vs Chisora is going to be a complete slugfest, boring fight – points win for Whyte.”

“I personally think that these kind of antics should come under the 'bringing the sport into disrepute' rule – the boxers and promoters should be fined a substantial amount and then we'll see this nonsense stop in no time – it's not entertaining, it is causing the sport harm and what's more, most times it's not genuine dislike but headline-grabbing hype to sell a fight, hence I say fine the promoter too, as I feel that this was welcomed to try and sell a poor PPV event.”

“As soon as Whyte lost to Joshua, I called it for him to have Chisora next! Been waiting for this slugfest to happen since then so now I’m buzzing it finally is and how much it's getting heated already!! Haha!! This fight should not disappoint!!”

“You are always going to get these antics before a Dillian Whyte fight and a Derek Chisora fight so both of them in the ring together, it has to be expected.

I get on with Dillian, he's a decent guy and he’s so funny! He has the skill to outbox Derek all night but if he picks the shots right then I can see him ending it early.”

“Whyte v Chisora is a good fight, thet’re both loose cannons so put them together and you’re going to get fireworks!

Is there genuine hatred? I'm not sure but I'm looking forward to this fight.”

“It bores me, to be fair. I thought Chisora looked unprofessional with his nonchalant manner at the face-off and The Gloves Are Off debacle is just predictable and tiresome. It helps to sell the fight and it's something for the casual fans to get excited about, I suppose.

All I’m interested in is when they get in that ring, and this is a great fight for the boxing fans, it doesn’t need any bigging up, it’s mouth-watering enough already.”

The ‘Rok‘n’Rolla’ Chris Jenkins is back in action this Saturday against big-punching Phillip Sutcliffe Jr in Belfast. How do you think the two-time British title contender will fare against the Irishman so far away from his home in Wales? 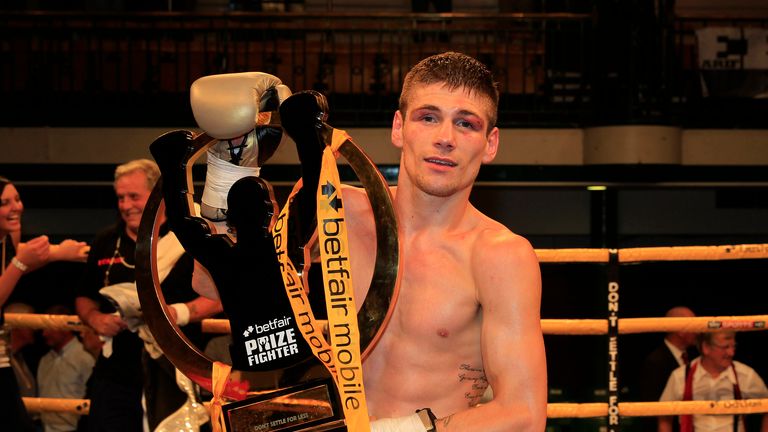 “I don't know a lot about Sutcliffe but rate Jenkins and his trainer Gary Lockett very highly.

A ring is a ring wherever it is so location shouldn't be an issue. It's going to be as simple as whoever has the best game plan and can implement it throughout, wins. Will be entertaining for sure.”

“Suttcliffe is a big puncher, it's a 50/50 fight for me and could be fight of the night. I can't see it going past eight rounds, both top lads and may best man win.”

“Talented kid – Chris Jenkins. When I was watching the Prizefighter tournaments, I thought I could win this easy, then I saw Chris Jenkins lol!

Don't know too much about Philip Sutcliffe Jr.”

“Somewhere down the line, Sutcliffe is going to catch him and when he does, he's going to sleep. No disrespect to Jenkins but Sutcliffe hits like a horse!”

“I think this is going to be a great fight, I don't think for one minute that it'll affect Chris being over in Belfast, he's too good a boxer to let things like that affect him.

As for the result, personally I don't think it'll go the distance as both are big punchers; which way, well that's more difficult to call, me I'll go for Chris winning but wouldn't be surprised if it is Philip.”

“Two great talents but Ireland is atmospheric and passionate, they really get behind their fighters.

I see it as a big ask for Jenkins, he's a great kid and I love his attitude and sense of humour but I just wonder if Sutcliffe's power will be a telling factor.”

“Sutcliffe v Jenkins is another good fight. Sutcliffe needs a name to get him noticed, he's heavy handed and was a top amateur but has had a slow burner pro career. Jenkins has just fell short at British level but is very capable this fight could go either way.”

“Tough fight for him. Many have known for years, behind the scenes in Ireland, how hard-hitting and talented Phil really is. It's going to be an excellent match, I suspect.”

“It’s great to see Chris back after such a long layoff. He’s definitely a British champion in the making, his fights with Tyrone Nurse were both very close.

In this fight, Sutcliffe Jr will always have a punchers chance, I think he’s only had three points wins from his 11 wins, so he can clearly bang!

Jenkins belongs at British Championship level, which, at this moment in time, is a level above Sutcliffe Jr, and therefore I think Jenkins will edge this fight on points with that vaster experience under his belt and despite the year out.”

Ask the Experts is proudly sponsored by Bartercard