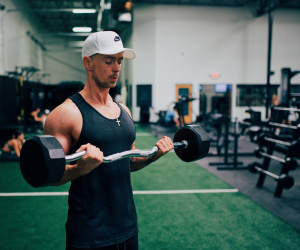 Are bicep curls a good exercise for boxers?

Are Bicep Curls Good For Boxers?

We have been hearing about the importance of exercise for a healthy mind and body since our childhood. There is no doubt physical activity and regular exercise keep us active and make our muscles strong.

‘Sport-specific training’ causes not much benefit but injuries in the long term. The reason behind this lies in the fact that our body wants balance. Sport-specific or organ-specific workouts result in muscle imbalances and ultimately disrupt normal body functioning.

Talking about boxing, it requires the muscles of the back, shoulders, arms, and core to work together. Exercise like bicep curls no doubt will enhance your arms’ muscle strength and endurance. But it will not work thoroughly for the long term if practiced alone.

Following are some facts about bicep curls, their benefits for boxers along with other exercises helpful in boxing:

Does It Help In Throwing Straight Punches?

In boxing, arms have a function of power delivery. By power delivery, we DO NOT mean ‘power generation’ that is the role of legs and lower back.

For delivering the power you need fast arms, not powerful arms. Fast arms give you the speed and snap to transfer the energy to your opponent. They will also help you recover fastly whenever hit by the opponent thus you can defend yourself.

For straight punches, the triceps are responsible for speed and snap. Whereas biceps are the source of speed for hooks and uppercuts. Thus bicep curls are not good for throwing straight punches.

Among the exercises that strengthen the body muscles, bicep curls are one of them. As the name indicates bicep curls target mainly the bicep muscles that are located on the front side of the upper arms. Doing it the right way can improve your physique and increase muscle strength as well.

Other muscles targeted are the brachialis and brachioradialis muscles. These are located under the biceps and forearm respectively. Overall muscle strength helps a boxer to approach the opponent and transfer maximum energy.

Good For Hooks And Uppercuts

Bicep muscles switch your extended forearm to lock position. This movement is involved in throwing hooks and uppercuts to your opponent in boxing. Thus bicep curls prove good for boxers. This is because your muscles do not get tired quickly when they are strong.

On the other hand, straight punches require movement from close to the extended position of the forearm. This involves triceps thus bicep curls can not help a boxer in throwing straight punches.

Boxing is not just a sport but a fitness exercise that engages multiple muscles of the body. Practicing it for some months will not only improve your overall physique but also build your cardio levels.

Given below are listed major muscles stimulated by boxing along with the mechanism behind their development:

If you are new to boxing, you will surely feel the burn in your shoulders whenever you play. Boxing is one of the effective shoulders’ workouts. Whether you are throwing the punches or defending yourself against the opponent, shoulder muscles are highly engaged. That makes the muscles stronger than before boxing.

From approaching the competitor to throwing the punch, the main muscular support behind is your back. This is because you are in the pushing posture while performing the whole boxing activity.

In this way, the majority of your back muscles are being used in the form of a group called the 'teres major'. Also, this motion provides you with the strongest and good looking back.

As we have already discussed, biceps are involved in hooks and uppercuts. They help the boxer to retract the arms after throwing the punch. Thus you get stabilizing energy to defend yourself in front of an opponent. Moreover, arm muscles become strong as these are being used continuously in punching movement.

Core muscles are involved in almost every type of exercise or fitness workout. The same is the case with boxing. Although the whole body is engaged in punching, the core muscles coordinate this movement. Thus all body organs work as a unit in this motion.

It's a give-and-take mechanism. Core muscle helps to transfer power to the arms and shoulder muscles and in turn, the punching activity strengthens the core muscles.

Other Exercises That Improve Your Punching Power 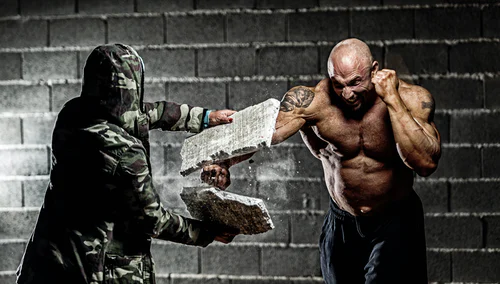 In boxing, the real game revolves around punching power. Some boxers just don't know the importance of this turning point of the game. Following are some common exercises that can improve your punching power to make your game at the next level:

Pushups are the form of workout that not only increases your punching power but also its speed. This is because it engages the arms, shoulders, and pectoral muscles all along.

Plyometric pushups are the modified type of push-ups with little variation. These are famous for enhancing punching power, especially in boxing and martial arts. Get down like a standard push-up, while backing up slightly lift your hand in the air or just clap them in front or backward position.

Shadowboxing is a training activity that focuses not only on the power of the punch but also on its right technique. Stand in front of a mirror or shadowbox, and watch yourself while practicing. You can find your weak points and try to improve them to boost up your game.

This method has been used for a long time to increase the punching power and strength. Lie flat and lift a medicine ball. Throw the ball with full power and try to catch it once it bounces back.

You can also try it by standing in a punching position and by using a ball of larger size. Practicing this for some time will noticeably increase your punching power and speed.

Everything has some pros and cons in it. It depends on you how you are following it. As excess of anything can be dangerous, bicep curls to some extent may prove beneficial for muscle strength. But there is not much evidence in support of bicep curls for boxers. So, you can’t just rely on it if you are in the field of boxing.

Gervonta Davis on Mario Barrios: "I’m going up two weight classes to face him. If they don’t give me the respect after this, I don’t know what I have to do"