Archie Sharp reveals the secret weapon within his team

Archie Sharp has a secret weapon

Archie Sharp (14-0) returns to action on April 27th at The SSE Arena, Wembley for his first outing since claiming the WBO European title.

‘Sharpshooter’ has openly spoken about past experiences with mental health and with the help of a coach, learns from his past demons by focusing on positivity and the importance of a strong mind to further his boxing career.

Archie explains how a strong mind has done wonders for not only his boxing career, but his general well-being too.

“My mind is so strong now because of my mind coach, I saw her before I turned pro and I was in a bit of a bad place towards the end of the amateurs, things weren’t great for me, so I deal with the mental health side of things.”

The Welling-boxer will appear in the ring on April 27th for the first time since defeating domestic rival Lyon Woodstock back in October 2018.

The Woodstock victory was Sharp’s ‘coming out’ fight after beating the popular Leicester lad in his own back yard at the Morningside Leicester Arena in front of the BT Sport cameras.

The contest came with new experiences for the undefeated 23-year-old after Woodstock opted to be the protagonist in a feisty build up.

“For the Woodstock fight, my mind was so strong and as you saw, I got the result I knew I was going to get.

“When they were talking to me and trying to get on my case, I was never out of control and I knew exactly what I needed to do.

“To be honest with you, I was mentally in control from the first press conference to the end of the fight.

“When I came into that ring on fight-night I was so zoned-in with what I needed to do and that is why I got the job done.”

Along with his fledging boxing career, now boasting a 14-0 record with seven knockouts to his name, the Welling man also focuses on using his past mental health experiences to help others.

“I go and do workshops for young kids and adults to talk about mental health because it all plays a part.

“I’ll use it for the rest of my life and will use it to help other people with it. It’s incredible to see what you can do when your state of mind is so strong.”

“I know exactly where I want to be in this sport. The next 18 months, I have a little plan which includes world title fights. In the next 18 months I’ll be at world level and mixing it with the top-level fighters for sure.

“I know how good I am as a fighter and I now believe it; I mentally believe it.” 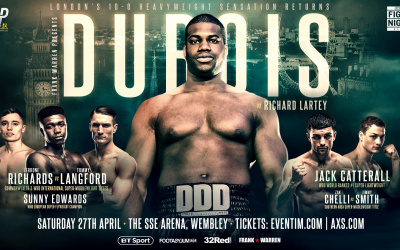