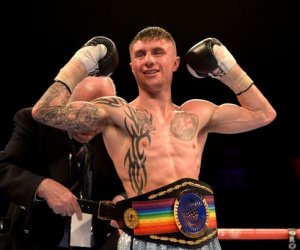 Anthony Nelson has branded Charlie Edwards as ‘full of himself’ and vows to punish the over-confident Surrey man when they clash for the WBA Continental Flyweight title at the Metro Radio Arena in Newcastle on Saturday night, live on Sky Sports.

Nelson has previously held the Commonwealth and English Super-Flyweight titles but took two years out of the game in April 2016 after surrendering the Commonwealth crown in an epic battle with Jamie Conlan in London that was awarded Fight of the Year by the British Boxing Board of Control.

‘Babyface’ returned to action in April with a six round win and now wants to get on the road back to winning honours, starting with strap he meets former World title challenger Edwards for on Saturday – a man he believes has talent but not enough to stop his return to the big-stage from being triumphant.

“Charlie is full of himself,” said Nelson. “He’s a good technician and he’s got some skills but he hasn’t been in with me yet. He won’t be able to keep me off, I’ll be too strong for him.

“I’ll let him think otherwise and be over-confident because he’ll be in for a real shock. He’ll have to bring every tool because he has a big job to do.

“The gym is buzzing, especially with title fights on the horizon. It brings everyone else on and inspires them to push on which obviously comes full circle and spurs me on even more.

“It’s a big night for Newcastle, it really feels like big time boxing is back and with Lewis and Josh spearheading that it opens the doors for the fighters who are either just starting out or who are knocking on the door.

“I’m buzzing to be back on the comeback trail. I got back to winning ways recently and we continue to keep things rolling.

“It was six rounds under my belt at the end of April, I dropped him in the first but in all honesty if I had got him out of there right away it wouldn’t have really served it’s purpose.

“I got the ring rust off and now we’re back in to title contention. I’ve served myself on the small hall shows and I’ve got to push on now starting on Saturday.”

Gavin McDonnell defends his WBC International Super-Bantamweight title against Stuart Hall in a must-win clash for both men, Arfan Iqbal defends his English Cruiserweight belt against Simon Vallily and former three-weight World champion Ricky Burns fights for the 50th time as a pro.

Tickets priced £40, £60, £80 and £100 are on sale now from the Metro Arena at http://www.metroradioarena.co.uk, on 0844 493 6666 or in person from the Metro Radio Arena Box Office. Please note venue facility and booking fees will apply. VIP tickets are on sale priced at £200 from http://www.matchroomboxing.com/tickets

Face value tickets for June 16 are available from http://www.stubhub.co.uk/matchroom-boxing-tickets/ . StubHub is the official ticket partner and marketplace of Matchroom Boxing and Anthony Joshua.