Wembley Stadium will bear witness to yet another Anthony Joshua (21-0 20KOs) mega-fight as he takes on WBA mandatory challenger Alexander Povetkin (34-1 24KOs) on September 22, live on Sky Sports Box Office.

Unbeaten Joshua will defend his IBF, WBA Super, WBO and IBO titles against the former WBA world heavyweight champion, as he returns to the scene of his epic victory over Wladimir Klitschko in front of a post-war record crowd of 90,000 in April 2017.

AJ’s last two fights were held at the Principality Stadium in Cardiff, the 28-year-old talent firstly stopping Carlos Takam before adding the WBO belt to his hoard in a points win over Joseph Parker in March, where Povetkin also appeared, fighting for the first time in the UK to brutally batter heavyweight hero David Price in five rounds.

Anthony Joshua:
He was largely untested until he was rocked in the second round of his meeting with bitter rival Dillian Whyte in December 2015. He survived the round on shaky legs and ended the fight in devastating fashion not long after in the seventh segment. Interestingly, the Brixton ‘Body-Snatcher’ had dropped AJ in the amateurs but he had already competed in professional fighting contests prior so arguably had an advantage over the inexperienced youngster when they first met in the unpaid code.

The only time Joshua has hit the canvas in the paid ranks was against Wladimir Klitschko in their epic encounter last year. The old master downed the young lion with a straight right hand that forced him off his feet. He had been hurt prior to that with a flush uppercut and a short right hook and looked a little spent at times. However, in that super-fight he showed his heart by climbing off the canvas, taking everything that ‘Dr. Steelhammer’ had to offer and still standing in the penultimate round where he killed the fight off in vicious fashion.

Alexander Povetkin:
‘The Russian Vityaz’ has also only ever been downed by the aforementioned Ukrainian, although considerably more than his future opponent, having laid down four times in total but still got to hear the final bell sound, miraculously. Despite the contest being as one-sided as the scores of 104-119 from all three ringside judges suggests, the considerably smaller, disadvantaged challenger earned respect from many for his tenacity to last the distance.

In his last fight with David Price, he was caught cold by a stunning left hook that caused him to back-pedal furiously into the ropes where he was given a standing eight-count by referee Howard John Foster. Once again, he hung in there and couldn’t be halted.

Anthony Joshua:
He is known for being an explosive puncher and has an incredible KO ratio having stopped 20 of 21 opponents. You could argue that the only person to hear the final bell was helped hugely by the ref, who consistently stepped in early to break up any chance Joshua had of getting to Parker in their fight, who also made it difficult by dancing away for the entire 36 minutes.

His punching power is right up there but it does take a few knockdowns before he gets his arm raised. It’s the speed that takes his opponents off their feet and his ruthless ability to kill the fight off moments later.

24 knockouts from 34 wins is a significantly lesser stat than his forthcoming foe. He has three stoppage wins from his last five fights but his stunning KO over Johann Duhaupas in 2016 was essentially against a punch bag standing there in front of him and it took about a thousand shots to finally get him out of there.

I don’t believe that he has the ability to completely knock out an opponent cold out of nowhere with his power, especially at the top level. His overhand right does land frequently but I can’t see it catching Joshua and icing him out.

Anthony Joshua:
His incredible physique is a testament to how hard he works in the gym and how he consistently keeps himself in good shape all year round. Despite the muscle bulk, his speed is blistering and it’s one of his biggest attributes.

He has incredible hand speed for such a big guy and utilises that quality in all his fights. I should add, mostly as a fun fact, that in Year 9 of his secondary school, he broke the 100metres sprint record with a time of 11.6 seconds!

The visiting fighter can throw punches in bunches, he can put together multiple shots with his left hand of all different varieties in quick bursts, but at his ripe age of almost 40, he definitely can’t match his junior for swiftness.

Anthony Joshua:
The man himself has spoken before about modelling his style on Hall of Famer Mike Tyson, but now classes himself as a bit wiser, craftier and shrewder, now aspiring to the legendary Ukrainian Wladimir Klitschko.

You could describe him as an intelligent pressure fighter. He loves to step in with an overhand right, a punch he tried to land copiously against the taller, bigger Klitschko, and something that we are likely to see being thrown against AJ.

He has been a pro now for almost five years and will have experienced 22 bouts within that time, thus far clocking up only 77 rounds of ring time, which is not a lot, testament to his skill and power having scored 13 first and second round KOs.

Alexander Povetkin:
Also an Olympic gold medallist, ‘Sasha’ started out life as a kickboxer, winning a world title at the age of 20 – world junior title in 1997, world senior in 1999 and a European title in 2000 – before embarking on a highly successful amateur boxing career that saw him claim gold at every major amateur tournament – 2002 and 2004 European Championships; 2003 Bangkok World Championships and Athens 2004 Olympic Games.

He ended his astounding amateur career with his record standing at an impressive 125-7 by the time he turned professional in the summer of 2005. All seven of defeats were avenged.

13 years in the paid ranks is a long time and the 39-year-old veteran has 224 rounds under his belt for it. Nearing 40, it's safe to say that he is in the twilight years of his career now. 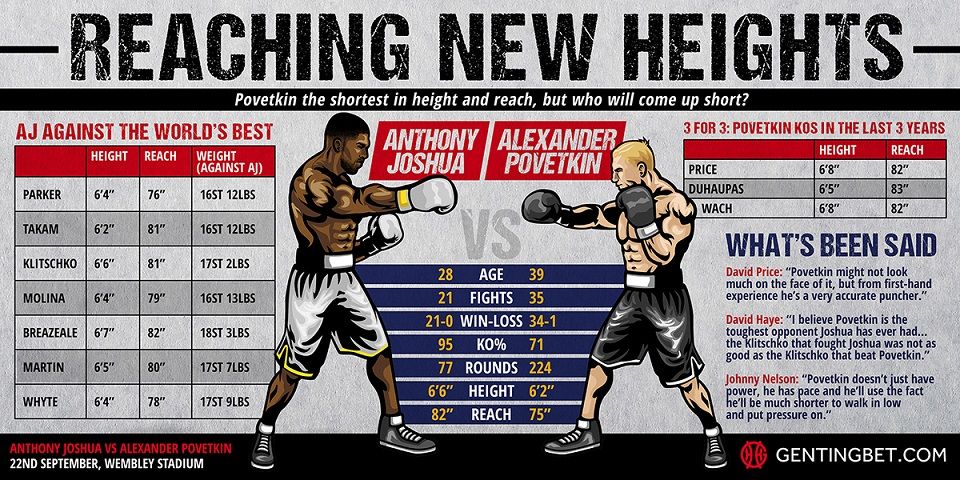 What are the odds? (Courtesy of GentingBet)

Joshua’s ability and frame should be able outdo Povetkin in every department, and should get to his 22nd win on the 22nd day of September.

No one has ever managed to stop Povetkin inside the distance, despite hurting him significantly in fights before, because he is tough, durable and stubborn, as well as being experienced, seasoned and intelligent.

Joshua is arguably the best fighter he has come up against in his 13-year professional career and at the age of 39 with 224 rounds of heavyweight battles hanging around his neck, this may attribute to a first KO defeat for the Russian.

I predict that Joshua will deck Povetkin early on in the first few rounds - Price had him over in the third and he was down as early as the second at the hands of Klitschko. Although I think he will survive an early knockdown, I am inclined to believe that Joshua will be able to finish him off with his killer instinct soon after. I estimate a win in the first six rounds for AJ, although the man himself predicts it'll all be over in the eighth.