AJ: "We will end up fighting anyway"

According to the International Boxing Federation, negotiation deadlines have been set for the end of January, which means that the Bulgarian will be first in line for AJ.

Usyk seems content, for now, to wait his turn as he entertains talks for fights with either Joseph Parker or Dereck Chisora next.

However, the two-time world champion has promised the Ukrainian that they will meet eventually, stating: "We will end up fighting anyway. The one that I don't fight, I will fight eventually. In the heavyweight division everyone is welcome to challenge so even if it doesn't happen first time, one of them will fight me in the future."

Usyk won an Olympic gold medal alongside Joshua in the London 2012 Olympics and then went on to make history by becoming the first undisputed cruiserweight champion to hold all four belts. Americans O'Neil Bell and Evander Holyfield, who preceded Usyk, were undisputed champions with three of the belts - IBF, WBA and WBC.

The Londoner asserted his ambitions, "We mean business. We want to fight the best. I go to those meetings. I let people know I'm about that life.

"He's the best cruiserweight that we've eve seen and I want to compete with him as he comes up to heavyweight. People say 'he's a crusierweight' but look what Evander Holyfield did - phenomenal fighter!"

Joshua continued to heap praise upon his future foe, "Who's to say that Usyk can't go on to do great things. But before we see that potential he has to come through the big boys of the division. I'll be the first to challenge him."

Joshua is rumoured to defend his titles to 'Cobra' Pulev in April or May at either Tottenham Hotspurs' new stadium or Wembley. Usyk will very likely fight Parker or Chisora in his next fight as he awaits a shot at Joshua. 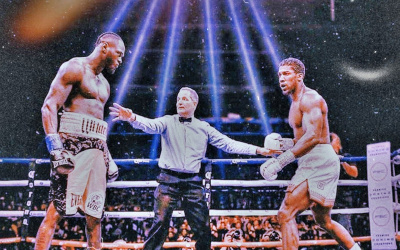