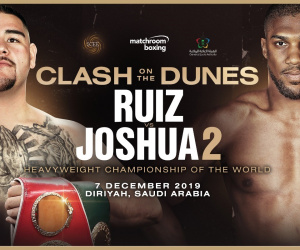 With fight fans already asking what time does the Ruiz-Joshua coverage on Sky start, what time will the ringwalks be, and who wins the rematch? It's clear that Hearn is not wrong in his statement.

So, BBN have provided all the details UK viewers need to tune in and watch the historic heavyweight world title fight on the same day in history that Eugene Corri, one of the original members of the National Sporting Club, became the first ever referee to officiate in a boxing ring, 112 years ago:

The rematch is set to take place in Diriyah, Saudi Arabia, in a newly-constructed 15,000-seater stadium.

Joshua's former titles, the WBA 'Super', IBF, WBO and IBO world heavyweight titles, now in the possession of Ruiz, are on the line. The only other belt out there is the WBC title, which has been in unbeaten American Deontay Wilder's possession for five years now.

UK fight fans can expect 'AJ' and 'The Destroyer' to make their ringwalks at 8:45pm (GMT), as Saudi Arabia is two hours ahead of the UK.

Even if you are not a Sky TV subscriber you can watch live via PC/Desktop/Mac, NOW TV Box or Smart Stick, iPhone, iPad, Android phone or Android tablet by creating an account at www.skysports.com/boxofficelive.

The first undercard fights have been revealed: Russian powerhouse Alexander Povetkin (35-2, 24 KOs) returns from his August triumph over Briton Hughie Fury to take on USA’s fast-rising Heavyweight talent Michael Hunter (18-1, 12 KOs) in an Eliminator for the WBA World Title.

In the third Heavyweight clash of the night, undefeated Croatian star Filip Hrgovic (9-0, 7 KOs) steps up to face former World Title challenger Eric Molina (27-5, 19 KOs) as he puts his WBC International Championship on the line for the third time.

The official press conference to formerly announce the fight took place at The Savoy in London on Monday, August 12.

Ruiz has already said that it will be a repeat result, “I know his flaws, I can do a lot better. The only thing he can do is just run around, he's not good at boxing.

"I expect a tougher test this time round, he is more hungry and wants his belts back but that is what is motivating me and making me more hungry. I want to train harder because I know he is, I only had a month and a half to train for the first fight but this time we have a whole camp so it benefits me. It is going to be an exciting fight, a hell of a fight - two big Heavyweights punching each other in the face!"

Londoner Joshua, a consummate professional, vowed to deal with the defeat and return stronger than ever, “I took a loss and I have to take it like a man.

"With the fight, I feel that I was up against a good challenger at the time and I was only champion until June 1, as Andy is champion now, that will last until December 7.” Read more...

Ruiz, trained by Manny Robles, was a stand-in opponent for the disgraced Jarrell Miller, after he failed three drug tests, and 'The Destroyer' took his golden opportunity with both hands, despite being widely dismissed by many as having no chance against the undefeated champion, largely due to his portly frame and unathletic appearance.

He bested the Briton from the opening bell, but a flash knockdown in the third round saw Ruiz on the floor for the first time in his career. Clear-eyed, the 29-year-old jumped straight back to his feet to exact revenge by flooring Rob McCracken-trained Joshua in return. Another three knockdowns over the following four rounds eventually caused referee Michael Griffin to call an end to the contest in round seven.

After much back and forth about where the rematch should take place with Madison Square Garden, Mexico, London and Cardiff all being discussed, the bout now heads to the Arabian Peninsula instead, much to the dismay of many fight fans. Eddie explains why the Diriyah was chosen for the location... Read more...

Oleksandr Usyk (16-0) lies in wait for the winner, after he was named as the WBO mandatory challenger.

What happens if Anthony Joshua loses to Andy Ruiz again?

AJ answers the question himself, “If you know me from the amateurs when I’ve lost from certain fights, you get back up and keep going. If I did lose to Andy Ruiz or I lost my next 10 fights, then maybe the next 10 fights weren’t for me but the 11th one might be." Read more...

18 boxing professionals and experts give their predictions for Andy Ruiz Jr vs Anthony Joshua 2... Read more...