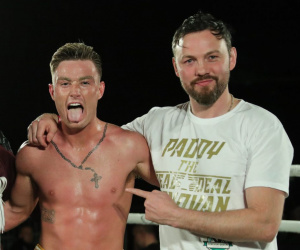 Former world champion Andy Lee sees choosing opponents for the hugely talented Paddy Donovan as one of his biggest challenges.

Lee, who manages and trains Limerick starlet Paddy Donovan (3-0, 2 KOs) and is also on Tyson Fury’s new coaching team, is delighted by the progress his young welterweight charge has made on a trio of #MTKFightNight events.

With the 21-year-old southpaw expected to move up quickly as a professional under US promoters Top Rank, having secured an amazing 13 Irish titles as an amateur, manager Lee believes there is still much more to see.

Lee said: “Match-making is an art in itself and I believe that’ll be one of the toughest elements of managing Paddy.

“He’s so talented and so young and at this stage, for the first year it’s really about getting experience about different types of opponents.

“For me, the records of the opponents don’t really matter compared to their style and the way in which they fight.

“There wasn’t much to see in his debut because it was over so soon but he was a lot more comfortable with the build-up to his second fight.

“There is more finesse to come. Paddy has already shown his power and to some extent his skill but sometimes you have to create the opportunity to knock your opponent out instead of forcing it.”

“It’s mine and his Dad’s job to keep him grounded but Paddy is very grounded naturally. He’s a very humble and respectful young man. It impresses you how he interacts with people – he’s got a lovely personality and a bit of charisma.

“All being well, I think he’ll be Limerick’s next world champion.”

Donovan said of the praise: “I enjoy hearing these king of things – especially from someone like the legendary Bob Arum.

“I must say I love being in the spotlight and I hope I can prove myself to be the full package.

“I believe that one day I can be a multiple-weight world champion. I’m not nervous right now. Maybe I will be before the fight but right now I’m just excited to get my boxing career underway.”

Ahead of WBO world title shot, Luke Keeler reveals he came close to retiring from boxing