Lee Selby wins on points in Newcastle despite early scare

There was a nervy win for flyweight superstar Andrew Selby (13-1. 7 KOs), who made it two wins in two weeks by overcoming Fadhili Majiha in Newcastle over eight rounds.

Selby said: “I’d give myself 5/10. It’s back to the drawing board, we’ll have a week off and then I’m off to MTK Marbella.

“It will be enjoyable training and I’ll work on my defence. I won a close fight, and I know that me and my trainer will be up for a while talking about that fight.”

Unbeaten trio Chad Ellis, Darren Reay, and Adam Gair all picked up dominant victories too as they look to go from strength to strength in their respective professional careers.

Here’s all you need to know from a brilliant night of action:

Unbeaten Ward (28-0, 4 KOs) was impressive throughout as he won every round on his way to defeating Yesner Talavera and extending his superb winning streak in front of a passionate crowd.

Ward said: “It was a good 10 rounder against a tough opponent and things went well, so now it’s onto the next. The crowd was fantastic and they made a lot of noise.

“It’s always nice to fight close to home and this is another step closer to a world title. I’m ready to fight anybody and we’ll keep pushing towards the big fights.”

Joseph Laws ends the show in style with an impressive stoppage over Danny Little.

Laws said: “I was pleased with the first fourth and fifth, but in the second and third I seemed to switch off a bit, but I stay stayed disciplined in there.

“I knew the shot would come, and when it came I took him out. I boxed and got the win and was exciting, I was the full package.”

Vallily said: “I’m enjoying it a lot more at heavyweight. My strength has always been there and I’ve got my head in the game. I want anybody in the top 10 at domestic level.

“I want a good domestic name before the end of the year. The English title has been mentioned and that would be great, but we’ll just see what is next.”

Chad Ellis made it eight wins from eight as he comfortably defeated Dale Arrowsmith.

Ellis said: “I was happy with how things went and it was good to get six rounds under my belt, especially after my wedding in the summer.

“I caught him with a few good shots and he kept on holding, but I was pleased with the win. It’s been a great eight weeks camp and I enjoyed getting back in there. I’ll keep active now, and hopefully get out before the year is out.”

Adam Gair continued the perfect start to his pro career with a comfortable win.

Gair said: “I got the rounds in and didn’t get hit much so that’s always great. I felt I could have maybe stopped him, but the rounds will benefit me more than blasting him out of there.

“I’m excited to be a part of this North East scene as boxing up here is going from strength to strength, both in the amateurs and professionals. It was another brilliant atmosphere in the arena.”

Reay said: “I was quite pleased with the performance. I had an opponent who came to win and that’s what I want. He’s been in there with the likes of Jack Catterall, and he’s on the verge of fighting for a world title.

“I’m hoping to get out again before the end of the year. There is the Northern Area title that I would love to box for. I want to step up to 10 rounds in the near future, so if I can fight for that title then that would be great.”

There were also wins for Steve Robinson, Tom Hill, Terry Wilkinson, Basi Razaq and Alex Farrell to cap off a fantastic #MTKFightNight in Newcastle. 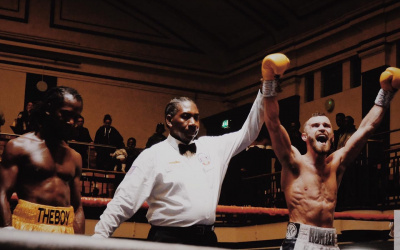