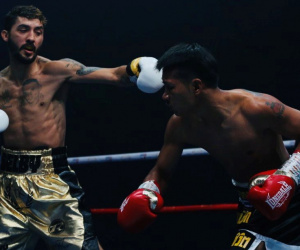 Andrew Selby opens up on depression

Andrew Selby impresses in Dubai after some tough times

Flyweight star Andrew Selby (12-1, 7 KOs) has candidly revealed the major struggles he has had to deal with ahead of his return to the ring on Friday, September 13.

The British flyweight champion said post-fight, "It was quick, I'd like to have had more rounds, but I seen the opening to take him out so I did, it's nice to back."

Andrew Selby: I need to kick myself up the arse and get back to basics

It’s been a tough journey throughout Selby’s career, and he delved deep into his personal life to explain some of the issues he has had to face.

Selby told BBC Wales: “I remember I won my first fight by stoppage and it was an amazing feeling. I went home and told my mum and dad and I couldn’t wait for my next fight.

“In 2012 I went to the Olympics and that was the highlight of my career. After the Olympics I turned professional and was winning titles, but then in 2017 out of nowhere my mother passed away.

“It was a sudden death and unexpected, and that’s what really broke me. It was the worst point in my life. She was my best friend and I could tell her anything. She’d always say I would be a world champion.

“When my mum passed away the first thing I did was pick up a bottle and drank and drank. I hid myself away and didn’t want to speak to anyone. I self-harmed and did a lot of things I’m not proud of.

“I went to counselling and the feeling of opening up is a relief. The pain is always there but it makes you happier that someone understands you. When I lost my mother I didn’t see a future, but now I’m grateful for going and speaking to people.

“I’ve passed all of the bad stuff and there’s no going back. I’m only going up and up and I’m going to get that world title belt. I’ve had to go through the bad to see the light.

“If you’re grieving or going through depression or anything, speak to people. Don’t hold it inside, seek him.”

30-year-old 'Superstar' Selby now wants to get back into world title contention as soon as possible.