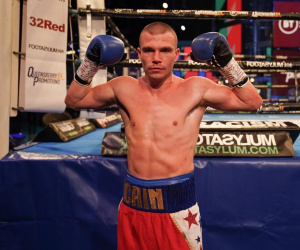 Unbeaten bantamweight powerhouse Andrew Cain (7-0, 6KOs) remained unbeaten by winning his seventh successive contest, but was forced to go the distance for the first time in his pro career.

Going into the contest undefeated, Manchester’s Stephen Jackson (1-1, 1KO) managed to do what none of Cain’s other opponents had ever done before, and that was to hear the final bell sound.

The pair fought over four-rounds at super-bantamweight on the undercard of Moruti Mthalane vs Sunny Edwards IBF World flyweight title clash on April 30 at the York Hall in London.

The 24-year-old Liverpudlian, trained by Paul Stevenson at the Everton Red Triangle gym, almost stopped his foe in round three, but the away fighter ran like the wind and survived the full fight.

With more rounds available, there's little doubt that Cain would have secured another stoppage victory. Up until now, none of his opponents had made it past the third round.

After the contest, Cain called out promotional stablemate Dennis McCann.