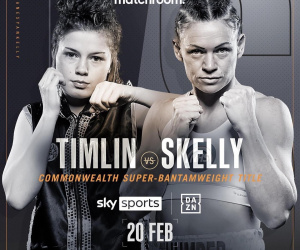 Amy Timlin vs Carly Skelly rematch is off

Liverpool’s Carly Skelly (3-0-1) and rival Amy Timlin (4-0-1) were all set to meet on February 20 for the vacant Commonwealth Female super-bantamweight title on the undercard of David Avanesyan’s European welterweight title defence to Josh Kelly, live on Sky Sports.

However, just 10 days before their eagerly awaited rematch, 21-year-old Timlin has withdrawn from the contest, leaving her opponent reeling.

Skelly commented, “She pulled out of the fight, I don’t know if she’s injured or what it is, so I don’t know why yet, but I’m absolutely gutted.

“I do believe that it’s a game, I don’t believe she’s ready. I think there’s fear there.”

Unbeaten in nine fights between them, the ambitious pair opened the PPV event in style as they went back and forth in an entertaining see-saw battle over 10 championship rounds, which ended in a split decision draw, although many spectators, including Carl Froch at ringside, felt that Skelly had done enough to win.

Remaining positive, Skelly is hopeful there’ll be another rearranged date confirmed very soon, “Eddie [Hearn] said he’s going to try get us back on another show, but I don’t know if she’s out for a while. But, as it stands right now, it is off.

“I’ll carry on training, probably taper it down slightly, but I’ve still got sparring this Saturday with Chloe Watson from Team GB.”

There were plenty of false starts ahead of their first meeting when they were originally scheduled to clash in the summer of 2020 on a Kieran Farrell Promotions show, but due to the pandemic and ensuing restrictions in place, it was cancelled on numerous occasions.

However, all’s well that ends well, as each of them were handed the opportunity of a lifetime to open one of the biggest boxing shows of the year.

Having only fought on small shows in her home city of Liverpool, Skelly made the most of her chance against the unbeaten Matchroom Boxing prospect, who had already won British, European and World titles in kickboxing, preceding her glittering amateur boxing career by dominating much of the contest, but forced to settle for a draw.

34-year-old Skelly is a full-time pediatric nurse at Alder Hey Children’s Hospital in Liverpool and mother of two boys. The cancellation isn’t just upsetting for the female fighter, but it also hits her in the pocket too, she explained, “It does affect me financially because I have not been working as much as usual due to training, so you’re waiting for that purse, which won’t come now.”

Fan-favourite Jonny Phillips was recently heard praising the Matchroom Boxing ‘Bubble’ setup on their behind the scenes shows last year ahead of his fight with Ibrahim Nadim on the Warrington-Lara undercard, and Selly was quick to share his sentiments, stating, “I loved it! A lot of people get bored, but it was lovely being away from the kids and it felt just like a holiday!

“As soon as you got there, you all have the COVID test, then when the results come back you are allowed out and you are all on the same floor and can all mingle then. For up to 24 hours when you first arrive, you get locked in your room. I didn’t mind it, but not knowing if your fight is definitely going ahead is hard, because you’re thinking ‘What if it comes back positive?’ So it’s the nicest knock on the door when they tell you you’re all fine.

“So yeah, now I’ve lost my holiday and I’ve lost my fight,” she joked. “But it’s boxing isn’t it? Just trying to stay positive.

“I just hope this can be rescheduled soon as there's unfinished business to be dealt with.”

Managed by Paul Stevenson and trained by Sid Saidankey at North Mersey ABC, Skelly only begun boxing aged 29 after agreeing to take part in a charity boxing event, and went on to win 15 from 20 amateur bouts, representing England and winning international medals.

She is currently unbeaten in four fights as a professional.