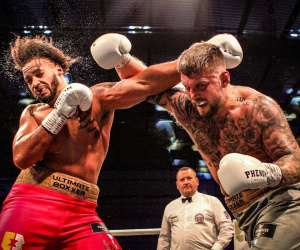 Mark Bennett: “I’m not a journeyman, but they just don’t want to give me a full camp”

Ultimate Boxxer finalist Mark ‘Bad News’ Bennett (7-1, 1KO) reveals the fight offers he has received recently and the reasons why he hasn’t accepted any of them.

In December last year, 32-year-old Mark Bennett defeated Josh Sandland (5-3-1) and Jay McFarlane (12-5, 5KOs) on points to reach the Ultimate Boxxer heavyweight tournament finals but hasn’t fought at all this year due to the halt that COVID-19 had brought to the UK.

Instead, Bennett, a father of four, used lockdown to change careers. He explained, “Just spent lockdown trying to push my new business. I was fitting bathrooms before but once lockdown came, no one wanted bathrooms fitted! So, I started my own business tarmacing and landscaping, and got a couple of lads working full-time, so it’s going well.”

With the new business up and running, Bennett has been back in the gym preparing for his next move. Unlike many other boxers around the country, the phone has been ringing for Bennett with big fight offers coming in, but it’s not been well received by the heavyweight currently ranked at no.16 in the UK by BoxRec.

“I’ve been back in training for two weeks now. I had a few phone calls during lockdown and it made me realise the need to get fit, because I’ve only been getting a few weeks notice for fights.

“I got offered Alen Babic but only gave me two weeks notice to fight him on the Dillian Whyte vs Alexander Povetkin undercard and I said ‘Yeah, I’ll fight anyone,’ but my manager, Joe Elfidh, said no to it and only wants me to fight when I’m fit.

“I’ll fight anyone at any time, but my manager has got my best interests at heart. Joe is saying we don’t want to go into fights half ready because it means we’re not being given 50-50 opportunities. I’m not a journeyman, but they just don’t want to give me a full camp.”

Instead, Croatian slugger Babic (4-0, 4KOs) ripped through American heavyweight champion Shawndell Terell Winters (13-4, 12KOs) in two rounds on August 22 in the conclusion of Matchroom’s Fight Camp series, which saw Dillian Whyte (27-1, 18KOs) get knocked out cold by Alexander Povetkin (36-2-1, 25KOs) in the fifth round of the WBC interim world heavyweight championship contest.

Bennett continued to reel off other fight offers received under unwelcome conditions, “They offered me Babic, then Wardley, I also got offered Zhan Kossobutskiy, but all the fights were offered at two weeks notice. I turned them down because I wanted a decent camp, but they don’t want to give that to you, they want to drop it on your toes and say you’re fighting in two weeks.

“I got offered Alen Babic again for the Whyte-Povetkin rematch undercard, but they phoned back to say they’re going a different route with someone else. Personally, I think he’ll come unstuck against anyone in the top 20. I’m not the best boxer myself, I’m not the slickest, but I’ve got boxing skills and I’m game.”

Bennett didn’t start boxing until he was 26 and won titles in the unlicensed circuit around the Doncaster area. As a pro, he already has notable scalps against Dorian Darch (12-12-1, 1KO) and Chris Healey (8-8, 2KOs), as well as his impressive displays in Ultimate Boxxer 6.

A future fight with Fabio Wardley (9-0, 8KOs) is still a strong interest for Bennett but only under the condition that he receives fair notice.

“I’d like to fight Fabio Wardley for the English heavyweight title, if not him then Nick Webb, but obviously someone has got to pay for it.”

Bennett was outpointed over three rounds in the Ultimate Boxxer final by Chertsey’s Nick Webb (16-2, 12KOs), which is his only career defeat to date.

“I think in the Ultimate Boxxer final, I was just worn out. My wife had our son seven weeks before and spent two weeks in antenatal, so only got under five weeks training in for it and had my mind elsewhere; I also had a hard route to final. I thought the format suited me though, I like the three rounds, but it’d just been better if I got stoppages and reserved more energy at the end of it.

“It’s hard to prepare for it because you didn’t know how long your breaks were between fights or who you were fighting, but I’m glad I did it, it was a good experience.”

After fighting live on BT Sport, Bennett has developed an appetite for the big stage and yearns for more big nights and hard fights.

“I wanted to let off my leash next,” he enthused. “I don’t think I’m past small hall shows, but it’s the tickets and that; ideally I want purse fights, so I can prove myself on the big stage.

“I want to fight someone like Wardley for a title. Personally, I don’t think anyone has given me a chance yet. I need a date in the distance to aim towards to prepare properly and I haven’t been given that.

“Against these lads, when I’m fully fit and ready, I know I can beat them.”

Joe’s Jab – The Show Must Go On